In rheumatoid arthritis (RA), immunological triggers at mucosal sites, such as the gut microbiota, may promote autoimmunity that affects joints. Here, we used discovery-based proteomics to detect HLA-DR–presented peptides in synovia or peripheral blood mononuclear cells and identified 2 autoantigens, N-acetylglucosamine-6-sulfatase (GNS) and filamin A (FLNA), as targets of T and B cell responses in 52% and 56% of RA patients, respectively. Both GNS and FLNA were highly expressed in synovia. GNS appeared to be citrullinated, and GNS antibody values correlated with anti–citrullinated protein antibody (ACPA) levels. FLNA did not show the same results. The HLA-DR–presented GNS peptide has marked sequence homology with epitopes from sulfatase proteins of the Prevotella sp. and Parabacteroides sp., whereas the HLA-DR–presented FLNA peptide has homology with epitopes from proteins of the Prevotella sp. and Butyricimonas sp., another gut commensal. Patients with T cell reactivity with each self-peptide also had responses to the corresponding microbial peptides, and the levels were directly correlated. Furthermore, HLA-DR molecules encoded by shared-epitope (SE) alleles were predicted to bind these self- and microbial peptides strongly, and these responses were more common in RA patients with SE alleles. Thus, sequence homology between T cell epitopes of 2 self-proteins and a related order of gut microbes may provide a link between mucosal and joint immunity in patients with RA. 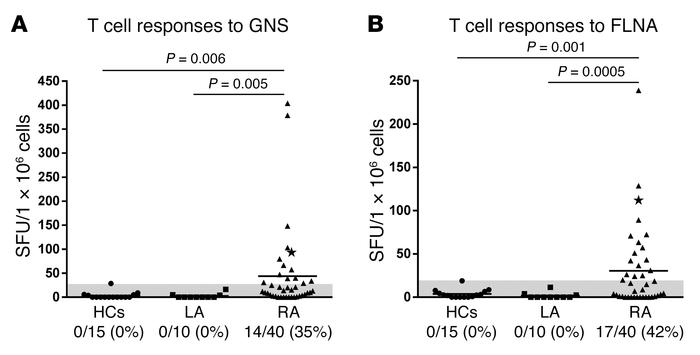 In initial experiments, () PBMCs from patients with RA or LA or from HC subjects were stimulated with a pool of 4 peptides, including the single GNS HLA-DR–presented peptide isolated from the synovial tissue of patient RA1, and 3 predicted promiscuous HLA-DR–binding peptides from GNS (1 μM each). () PBMCs from patients and HCs were incubated with a pool of 4 peptides, including the single FLNA HLA-DR–presented peptide identified from the synovial tissue and PBMCs from patient RA1, and 3 predicted promiscuous HLA-DR–binding peptides from FLNA (1 μM each). In each assay, a positive control (phytohemagglutinin) and a negative control (no peptide) were included. The amount of IFN-γ secretion, as determined by an ELISpot assay, is shown. A positive response was defined as greater than 3 SD above the mean value for HCs (area above the shaded region). The values for patient RA1 are indicated with a star. Horizontal lines represent the mean values for each group. values were determined by unpaired, 2-tailed test with Welch’s correction. SFU, spot-forming units per million PBMCs.