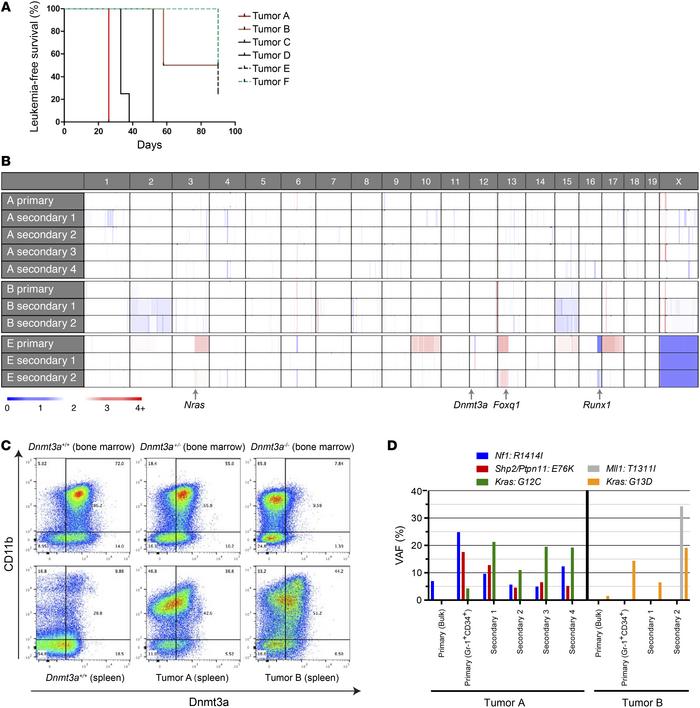 () Plot demonstrating disease latency for sublethally irradiated WT animals engrafted with tumors, designated A–F (see and ). For each of the 6 primary tumors that were transplanted, 3 to 5 secondary recipient mice were assessed. () Copy number variation in sequenced tumors. Note that none of the tumors has deletions involving chromosome 12 at the location of the gene. The locations of 3 cancer-related genes that were amplified () or deleted () in tumor E are shown. Tumor E was derived from a male mouse; the single copy of the X chromosome in these tumors “calibrates” the color value for a single copy deletion. () Representative flow cytometry plots for Dnmt3a protein abundance in the CD11b+ compartment of , , and bone marrow samples (top panels) and a WT spleen or tumors A and B (derived from the unmanipulated spleen samples from the primary mice), showing preserved expression of WT Dnmt3a protein in the CD11b+ cells in each tumor spleen sample. The level of Dnmt3a protein in the tumor cells was similar to that of the haploinsufficient bone marrow cells. () VAFs for selected mutations detected in primary tumors (either bulk or sorted to enrich for Gr-1+CD34+ myeloid tumor cells) and in corresponding tumors from transplanted secondary recipients. mutation VAFs are from AmpliSeq data (), while other mutation VAFs are from exome sequencing ().