Enterobacteria secrete an inhibitor of Pseudomonas virulence during clinical bacteriuria

Enterobacteria secrete an inhibitor of Pseudomonas virulence during clinical bacteriuria

Escherichia coli and other Enterobacteriaceae are among the most common pathogens of the human urinary tract. Among the genetic gains of function associated with urinary E. coli isolates is the Yersinia high pathogenicity island (HPI), which directs the biosynthesis of yersiniabactin (Ybt), a virulence-associated metallophore. Using a metabolomics approach, we found that E. coli and other Enterobacteriaceae expressing the Yersinia HPI also secrete escherichelin, a second metallophore whose chemical structure matches a known synthetic inhibitor of the virulence-associated pyochelin siderophore system in Pseudomonas aeruginosa. We detected escherichelin during clinical E. coli urinary tract infection (UTI) and experimental human colonization with a commensal, potentially probiotic E. coli bacteriuria strain. Escherichelin production by colonizing enterobacteria may help human hosts resist opportunistic infections by Pseudomonas and other pyochelin-expressing bacteria. This siderophore-based mechanism of microbial antagonism may be one of many elements contributing to the protective effects of the human microbiome. Future UTI-preventive probiotic strains may benefit by retaining the escherichelin biosynthetic capacity of the Yersinia HPI while eliminating the Ybt biosynthetic capacity.

Escherichelin is produced during clinical UTI and experimental human colonization with the asymptomatic bacteriuria strain HU2117. 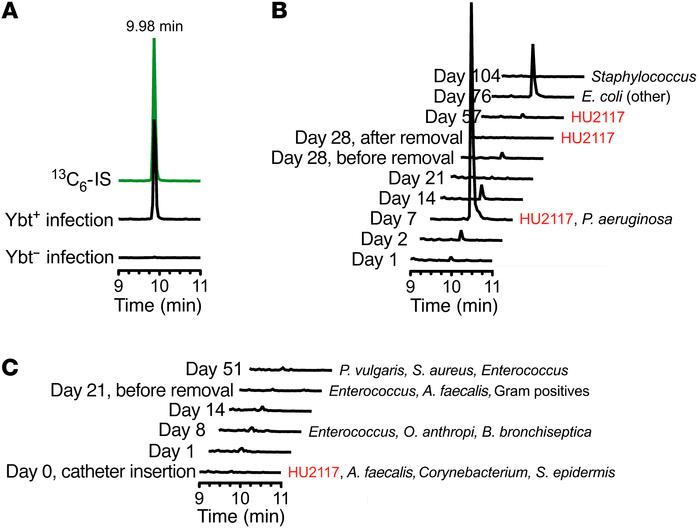 () Representative LC-MS/MS chromatogram for escherichelin in urine from a patient with an uncomplicated UTI caused by a Ybt-producing UPEC strain (results from 18 urine samples are shown in ). Escherichelin coeluted with the 13C-IS (green). Escherichelin was undetectable in urine from a patient with a UTI caused by a Ybt-nonproducing UPEC strain. ( and ) LC-MS/MS chromatograms for escherichelin in urine from subjects who were successfully () or unsuccessfully () colonized with . HU2117. The days after insertion of the HU2117-coated study catheter are indicated on the left. Where microbiological culture data were available, the results are listed to the right of the chromatograms. The colonized subject (, subject 9) was colonized with HU2117 for 57 days and then developed a febrile UTI caused by another strain of . on day 76, after colonization had ended. On day 7, . was also present in this subject’s urine. Escherichelin was detectable throughout the colonization period and during the symptomatic . UTI. The noncolonized subject () did not show a presence of HU2117 after day 0, when the study catheter was inserted, and escherichelin was not detected in the longitudinal samples. , ; , ; , ; , ; , .