Jagged-2 is dynamically expressed in BMECs. 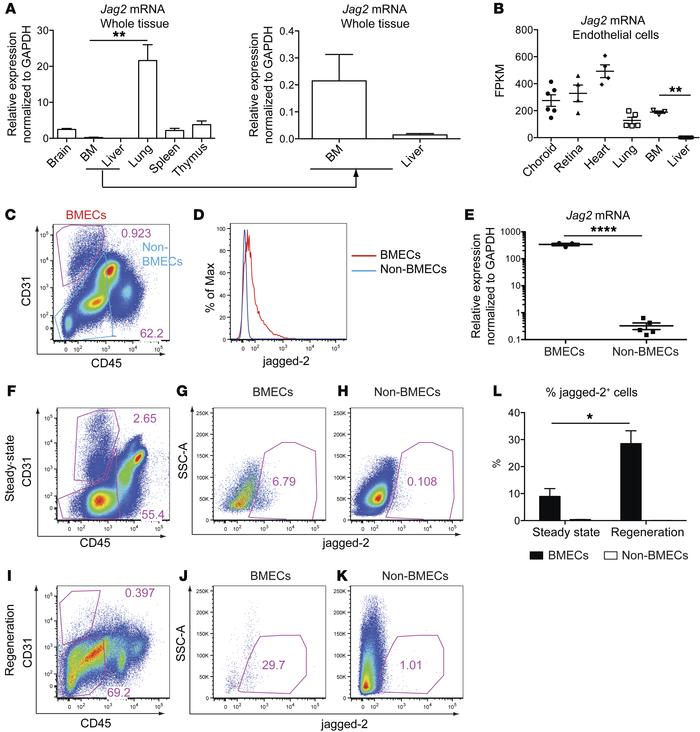 () The expression level of mRNA in different mouse whole organs ( = 3). The mRNA expression is calculated using GAPDH as internal control. () The FPKM (fragments per kilobase of exon per million fragments mapped) value for mRNA in primary ECs from various organs. The number of dots indicates the number of biological replicates. () Representative flow cytometric plots for the gating of CD31+CD45– BMECs and CD31–CD45– non-BMECs ( = 4). () Histogram of jagged-2 expression on BMECs and non-BMECs. () qPCR quantification of mRNA from sorted BMECs ( = 3) and non-BMECs ( = 5). The RNA expression level is calculated using GAPDH as internal control. (–) Representative flow plots for jagged-2 expression in BMECs and non-BMECs ( = 4) under homeostatic conditions. (–) Jagged-2 expression within BMECs and non-BMECs at 2 weeks after 650 cGy sublethal irradiation ( = 5). () Comparison of percentage of jagged-2+ cells among BMECs under steady state and during regeneration after myeloablative injuries. Error bars indicate the SEM. * < 0.05, ** < 0.01, and **** < 0.0001, by 2-tailed unpaired test. The numbers in the flow plots represent percentages of cells.