Autophagy is important for liver homeostasis, and the deficiency leads to injury, inflammation, ductular reaction (DR), fibrosis, and tumorigenesis. It is not clear how these events are mechanistically linked to autophagy deficiency. Here, we reveal the role of high-mobility group box 1 (HMGB1) in two of these processes. First, HMGB1 was required for DR, which represents the expansion of hepatic progenitor cells (HPCs) implicated in liver repair and regeneration. DR caused by hepatotoxic diets (3,5-diethoxycarbonyl-1,4-dihydrocollidine [DDC] or choline-deficient, ethionine-supplemented [CDE]) also depended on HMGB1, indicating that HMGB1 may be generally required for DR in various injury scenarios. Second, HMGB1 promoted tumor progression in autophagy-deficient livers. Receptor for advanced glycation end product (RAGE), a receptor for HMGB1, was required in the same two processes and could mediate the proliferative effects of HMBG1 in isolated HPCs. HMGB1 was released from autophagy-deficient hepatocytes independently of cellular injury but depended on NRF2 and the inflammasome, which was activated by NRF2. Pharmacological or genetic activation of NRF2 alone, without disabling autophagy or causing injury, was sufficient to cause inflammasome-dependent HMGB1 release. In conclusion, HMGB1 release is a critical mechanism in hepatic pathogenesis under autophagy-deficient conditions and leads to HPC expansion as well as tumor progression.

NRF2 is required for hepatic HMGB1 release and DR. 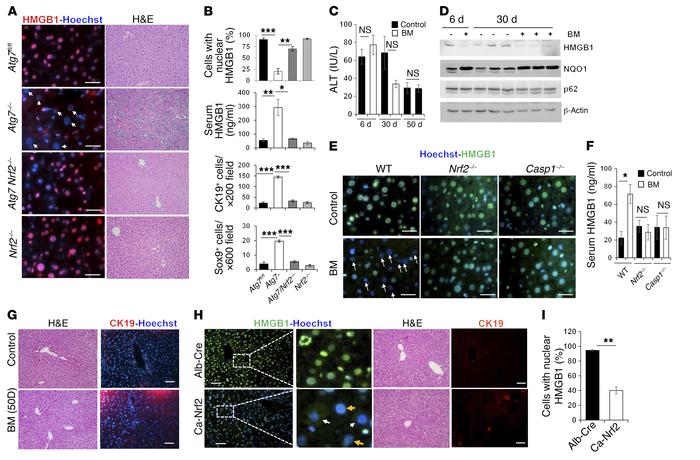