Obesity causes insulin resistance, and PPARγ ligands such as rosiglitazone are insulin sensitizing, yet the mechanisms remain unclear. In C57BL/6 (B6) mice, obesity induced by a high-fat diet (HFD) has major effects on visceral epididymal adipose tissue (eWAT). Here, we report that HFD-induced obesity in B6 mice also altered the activity of gene regulatory elements and genome-wide occupancy of PPARγ. Rosiglitazone treatment restored insulin sensitivity in obese B6 mice, yet, surprisingly, had little effect on gene expression in eWAT. However, in subcutaneous inguinal fat (iWAT), rosiglitazone markedly induced molecular signatures of brown fat, including the key thermogenic gene . Obesity-resistant 129S1/SvImJ mice (129 mice) displayed iWAT browning, even in the absence of rosiglitazone. The 129 locus had increased PPARγ binding and gene expression that were preserved in the iWAT of B6x129 F1–intercrossed mice, with an imbalance favoring the 129-derived alleles, demonstrating a -acting genetic difference. Thus, B6 mice have genetically defective expression in iWAT. However, when was activated by rosiglitazone, or by iWAT browning in cold-exposed or young mice, expression of the B6 version of was no longer defective relative to the 129 version, indicating epigenomic rescue. These results provide a framework for understanding how environmental influences like drugs can affect the epigenome and potentially rescue genetically determined disease phenotypes. 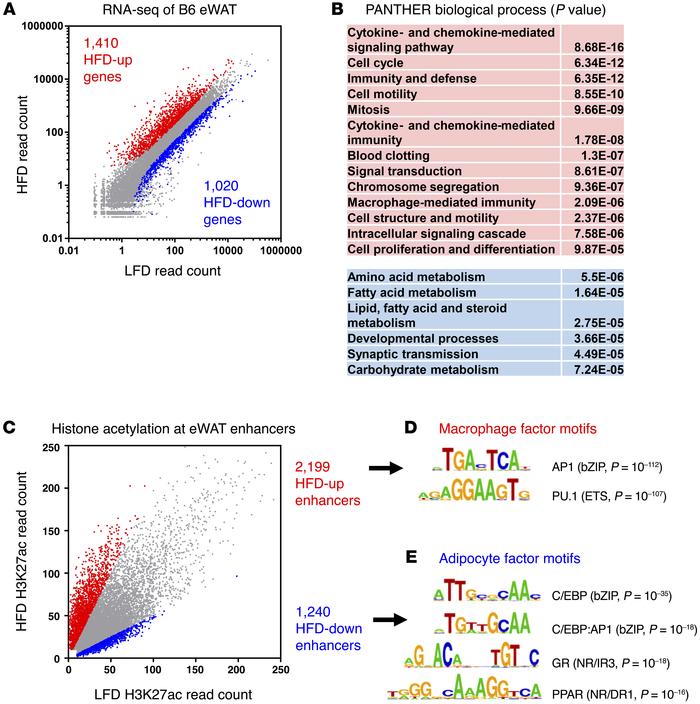 () Scatterplot of RNA-seq data showing genes regulated by HFD in eWAT, using cutoffs of less than 0.05 for the FDR and a fold-change of greater than 2 in 2 replicate cohorts ( = 4–5 male B6 mice per diet). () Pathway analysis of genes that were HFD-upregulated (HFD-up) (pink) or HFD-downregulated (HFD-down) (blue). () ChIP-seq for RNA Pol II in B6 eWAT identified 14,174 sites of intergenic occupancy. Scatterplot shows ChIP-seq for histone acetylation (H3K27ac) at these presumed enhancer sites in eWAT from B6 mice on HFD versus those on LFD. ( and ) HFD-regulated enhancers were analyzed for the occurrence of transcription factor motifs.