Primary adrenal insufficiency is life threatening and can present alone or in combination with other comorbidities. Here, we have described a primary adrenal insufficiency syndrome and steroid-resistant nephrotic syndrome caused by loss-of-function mutations in sphingosine-1-phosphate lyase (SGPL1). SGPL1 executes the final decisive step of the sphingolipid breakdown pathway, mediating the irreversible cleavage of the lipid-signaling molecule sphingosine-1-phosphate (S1P). Mutations in other upstream components of the pathway lead to harmful accumulation of lysosomal sphingolipid species, which are associated with a series of conditions known as the sphingolipidoses. In this work, we have identified 4 different homozygous mutations, c.665G>A (p.R222Q), c.1633_1635delTTC (p.F545del), c.261+1G>A (p.S65Rfs*6), and c.7dupA (p.S3Kfs*11), in 5 families with the condition. In total, 8 patients were investigated, some of whom also manifested other features, including ichthyosis, primary hypothyroidism, neurological symptoms, and cryptorchidism. mice recapitulated the main characteristics of the human disease with abnormal adrenal and renal morphology. mice displayed disrupted adrenocortical zonation and defective expression of steroidogenic enzymes as well as renal histology in keeping with a glomerular phenotype. In summary, we have identified mutations in humans that perhaps represent a distinct multisystemic disorder of sphingolipid metabolism.

p.R222Q and p.F545del mutations affect highly conserved areas in and are loss of function, resulting in proteins with reduced lyase activity. 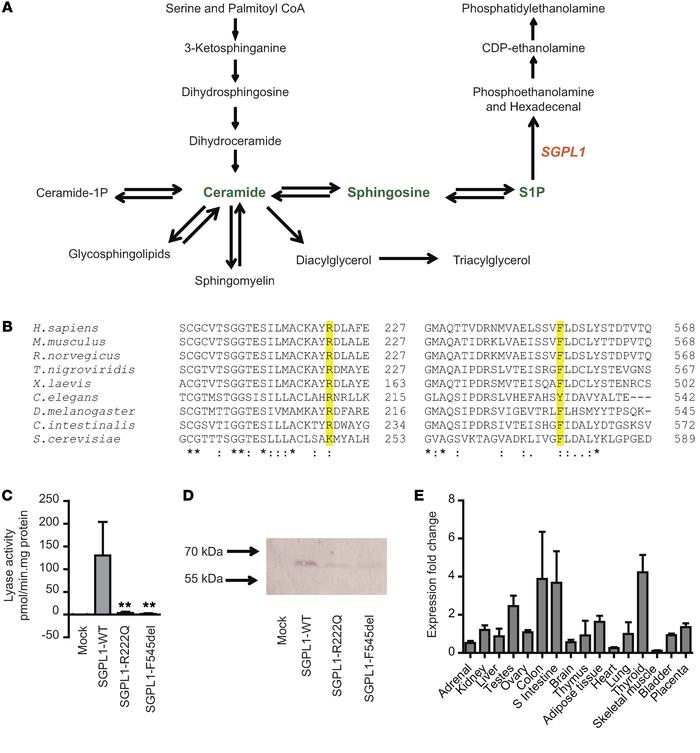