Molybdenum cofactor deficiency (MoCD) is an autosomal recessive inborn error of metabolism characterized by neurodegeneration and death in early childhood. The rapid and progressive neurodegeneration in MoCD presents a major clinical challenge and may relate to the poor understanding of the molecular mechanisms involved. Recently, we reported that treating patients with cyclic pyranopterin monophosphate (cPMP) is a successful therapy for a subset of infants with MoCD and prevents irreversible brain damage. Here, we studied S-sulfocysteine (SSC), a structural analog of glutamate that accumulates in the plasma and urine of patients with MoCD, and demonstrated that it acts as an N-methyl D-aspartate receptor (NMDA-R) agonist, leading to calcium influx and downstream cell signaling events and neurotoxicity. SSC treatment activated the protease calpain, and calpain-dependent degradation of the inhibitory synaptic protein gephyrin subsequently exacerbated SSC-mediated excitotoxicity and promoted loss of GABAergic synapses. Pharmacological blockade of NMDA-R, calcium influx, or calpain activity abolished SSC and glutamate neurotoxicity in primary murine neurons. Finally, the NMDA-R antagonist memantine was protective against the manifestation of symptoms in a tungstate-induced MoCD mouse model. These findings demonstrate that SSC drives excitotoxic neurodegeneration in MoCD and introduce NMDA-R antagonists as potential therapeutics for this fatal disease.

Sulfite toxicity in neuronal tissue is mediated by SSC activation of the NMDA-R. 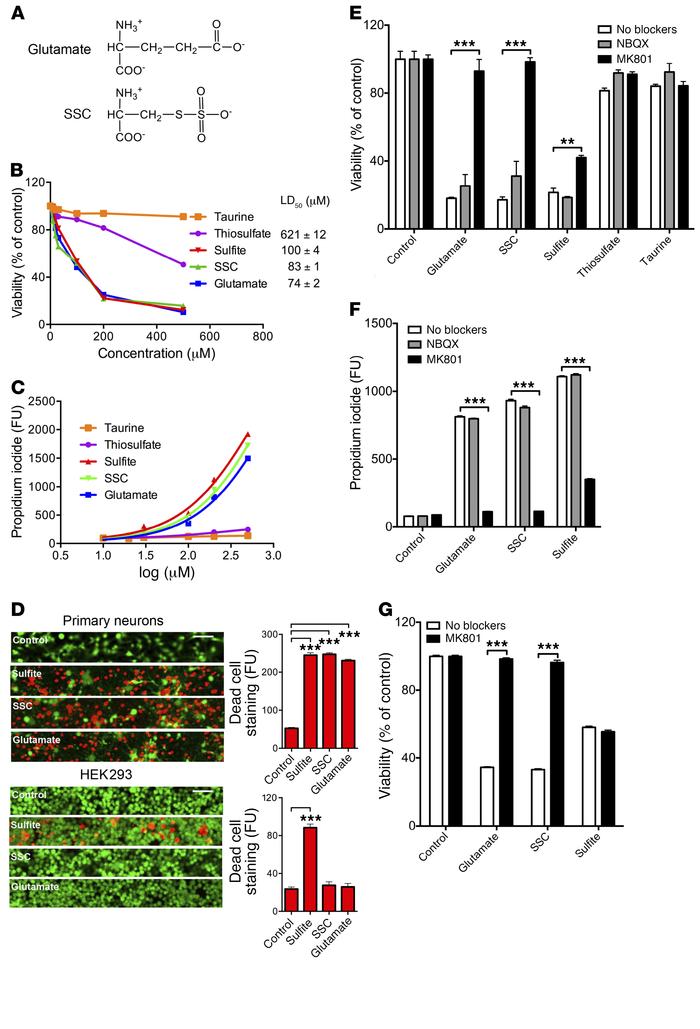 () Chemical structure of glutamate and SSC. ( and ) Dose-dependent toxicity of taurine, thiosulfate, sulfite, SSC, and glutamate in cortical neurons after a 12-hour incubation in culture medium, as assessed by MTT assay ( = 3) () or propidium iodide staining ( = 9) (). Cultures were treated with either vehicle (control) or 10, 20, 50, 100, 200, and 500 μM of each of the investigated metabolites, and the LD50 values are highlighted for each metabolite using the MTT assay. () Representative images of live/dead staining under control conditions and in the presence of sulfite, SSC, or glutamate in primary neurons and HEK293 cells. Scale bars: 20 μm. The quantification of dead cells (red signal) was performed by measuring the fluorescence of ethidium homodimer-1 ( = 6 for each condition). ( and ) Cell viability of cortical neurons measured by () MTT assay for glutamate, SSC, sulfite, thiosulfate, and taurine (each 200 μM) ( = 3) and () propidium iodide staining for glutamate, SSC, and sulfite at the same concentration ( = 12) in the presence of the NMDA-R blocker MK801 (1 μM) and the AMPA-R blocker NBQX (20 μM). () Cell viability of cortical neurons in ACSF media in the absence and presence of the NMDA-R blocker MK801 for glutamate, sulfite, and SSC ( = 3). Data are presented as the mean ± SEM. ** < 0.01 and *** < 0.001, by 2-Way ANOVA with Dunnett’s (–) or Sidak’s () multiple comparisons test. FU, fluorescence units.