Compromised apoptotic signaling is a prerequisite for tumorigenesis. The design of effective therapies for cancer treatment depends on a comprehensive understanding of the mechanisms that govern cell survival. The antiapoptotic proteins of the BCL-2 family are key regulators of cell survival and are frequently overexpressed in malignancies, leading to increased cancer cell survival. Unlike BCL-2 and BCL-XL, the closest antiapoptotic relative BCL-W is required for spermatogenesis, but was considered dispensable for all other cell types. Here, however, we have exposed a critical role for BCL-W in B cell survival and lymphomagenesis. Loss of conferred sensitivity to growth factor deprivation–induced B cell apoptosis. Moreover, loss profoundly delayed MYC-mediated B cell lymphoma development due to increased MYC-induced B cell apoptosis. We also determined that MYC regulates BCL-W expression through its transcriptional regulation of specific miR. BCL-W expression was highly selected for in patient samples of Burkitt lymphoma (BL), with 88.5% expressing BCL-W. knockdown in BL cell lines induced apoptosis, and its overexpression conferred resistance to BCL-2 family–targeting BH3 mimetics. Additionally, BCL-W was overexpressed in diffuse large B cell lymphoma and correlated with decreased patient survival. Collectively, our results reveal that BCL-W profoundly contributes to B cell lymphoma, and its expression could serve as a biomarker for diagnosis and aid in the development of better targeted therapies.

Cytokine deprivation–induced pre–B cell death is accelerated by loss of . 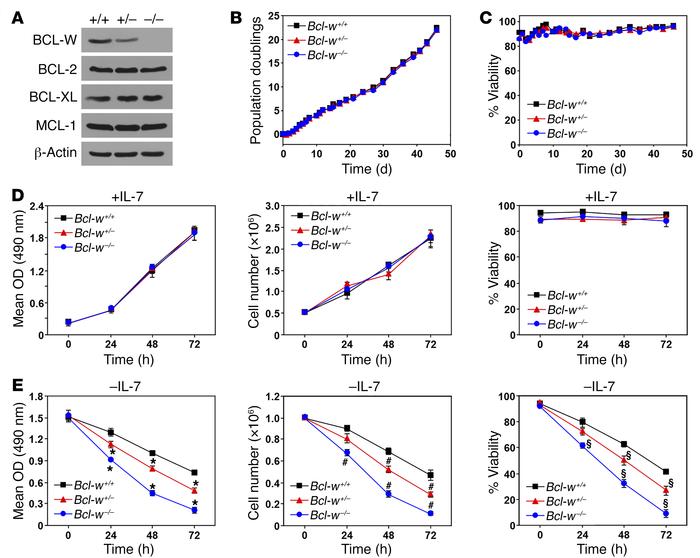 BM from , , and littermates was placed into IL-7–containing media on day 0. Western blotting was performed on pre–B cells that grew out of the cultures (). Cells were counted at intervals, population doublings were calculated (), and viability () was determined by trypan blue dye exclusion. ( and ) Equal numbers of pre–B cells of each genotype were plated with () or without () IL-7. MTS assays were performed in quadruplicate at intervals (left, and ). Total viable cell numbers (middle, and ) and viability (right, and ) were measured with trypan blue in triplicate at the indicated intervals. Data shown are representative results of 2 to 4 independent experiments from cells isolated from 2 separate litters generated by different parents. Error bars indicate the SD. For , * < 0.0001, # < 0.0004, and § < 0.0009, by 1-way ANOVA.