Function of the ATX/LPA/LPA1 signaling axis in β-catenin stabilization and collagen I induction in MCs. 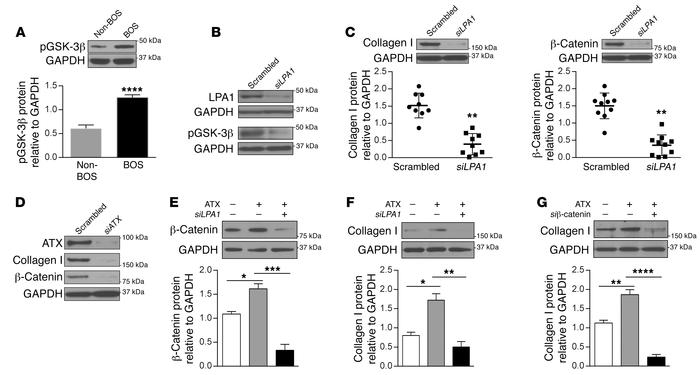 () Phospho–GSK-3β (Ser9) protein expression in BOS and non-BOS MCs as measured by immunoblotting. Mean ± SEM ( = 5 for non-BOS MCs and 6 for BOS MCs with unpaired test). ( and ) BOS MCs were transfected with siRNA or scrambled siRNA and analyzed by immunoblotting. Representative immunoblots shown are from the same biological sample. Blots of collagen I and β-catenin from one membrane and hence the same loading control (GAPDH) blot are shown. Quantitative analysis demonstrates the effect of silencing on collagen I ( = 9) and β-catenin ( = 10) protein expression in MCs derived from individual patients with BOS (mean ± SEM, paired test). () BOS MCs were transfected with or scrambled siRNA, and protein expression was analyzed by immunoblotting ( = 4). (–) Non-BOS MCs were treated with recombinant ATX (100 ng/ml, 24 hours). In the indicated conditions, cells were transfected with or β-catenin siRNA before ATX treatment. Mean ± SEM ( = 5/group for and , and = 4/group for with ANOVA). Data were similar in 3 independent experiments. * < 0.05, ** < 0.01, *** < 0.001, **** < 0.0001.