Type I IFNs promote cellular responses to viruses, and IFN receptor (IFNAR) signaling regulates the responses of endothelial cells of the blood-brain barrier (BBB) during neurotropic viral infection. However, the role of astrocytes in innate immune responses of the BBB during viral infection of the CNS remains to be fully elucidated. Here, we have demonstrated that type I IFNAR signaling in astrocytes regulates BBB permeability and protects the cerebellum from infection and immunopathology. Mice with astrocyte-specific loss of IFNAR signaling showed decreased survival after West Nile virus infection. Accelerated mortality was not due to expanded viral tropism or increased replication. Rather, viral entry increased specifically in the hindbrain of IFNAR-deficient mice, suggesting that IFNAR signaling critically regulates BBB permeability in this brain region. Pattern recognition receptors and IFN-stimulated genes had higher basal and IFN-induced expression in human and mouse cerebellar astrocytes than did cerebral cortical astrocytes, suggesting that IFNAR signaling has brain region–specific roles in CNS immune responses. Taken together, our data identify cerebellar astrocytes as key responders to viral infection and highlight the existence of distinct innate immune programs in astrocytes from evolutionarily disparate regions of the CNS.

Cytokine and chemokine expression in the CNS following s.c. inoculation. 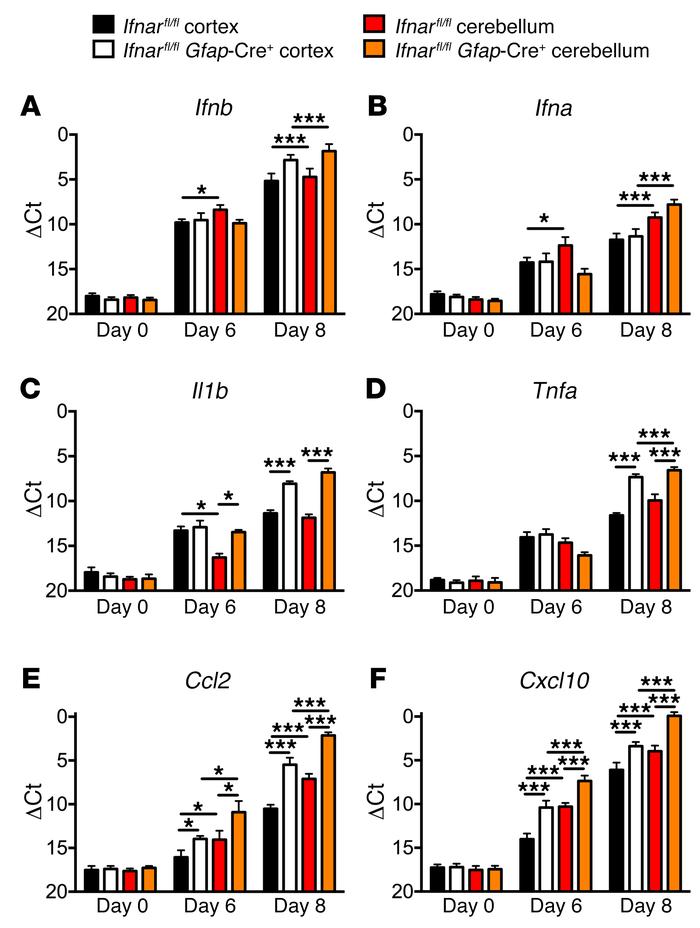 (–) Mice were s.c. inoculated with WNV. Cerebral cortex and cerebellar tissues were extracted on the indicated post-infection days. Relative transcript levels in tissue homogenates were measured by SYBR qRT-PCR for the indicated cytokines and chemokines. Data for individual mice were normalized to . Data represent the mean ± SEM from a total of 5 to 6 mice and were collected from 2 independent experiments. All data were analyzed by 2-way ANOVA. * < 0.05 and *** < 0.001.