Dickkopf1 (DKK1) is a secretory protein that antagonizes oncogenic Wnt signaling by binding to the Wnt coreceptor low-density lipoprotein receptor–related protein 6 (LRP6). DKK1 may also regulate its own signaling to promote cancer cell proliferation, but the mechanism is not understood. Here, we identified cytoskeleton-associated protein 4 (CKAP4) as a DKK1 receptor and evaluated CKAP4-mediated DKK1 signaling in cancer cell proliferation. We determined that DKK1 binds CKAP4 and LRP6 with similar affinity but interacts with these 2 receptors with different cysteine-rich domains. DKK1 induced internalization of CKAP4 in a clathrin-dependent manner, further supporting CKAP4 as a receptor for DKK1. DKK1/CKAP4 signaling activated AKT by forming a complex between the proline-rich domain of CKAP4 and the Src homology 3 domain of PI3K, resulting in proliferation of normal cells and cancer cells. Expression of DKK1 and CKAP4 was frequent in tumor lesions of human pancreatic and lung cancers, and simultaneous expression of both proteins in patient tumors was negatively correlated with prognosis and relapse-free survival. An anti-CKAP4 antibody blocked the binding of DKK1 to CKAP4, suppressed AKT activity in a human cancer cell line, and attenuated xenograft tumor formation in immunodeficient mice. Together, our results suggest that CKAP4 is a potential therapeutic target for cancers that express both DKK1 and CKAP4. 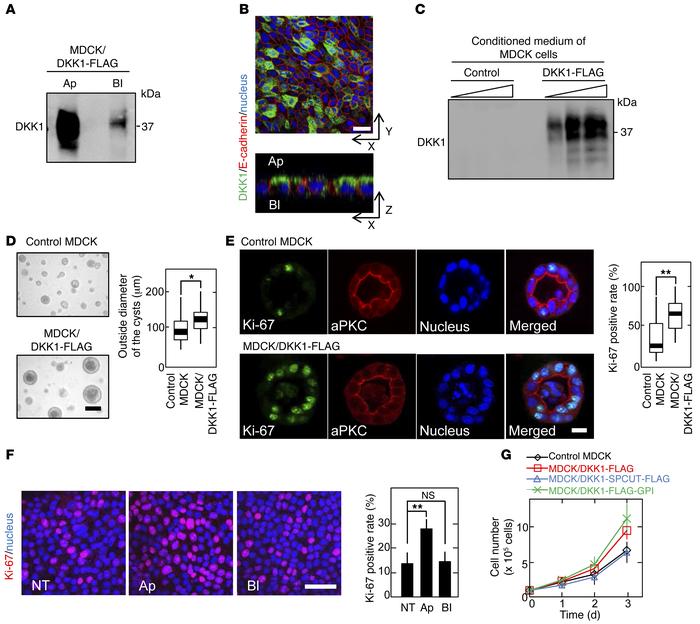 () MDCK/DKK1-FLAG cells were subjected to the apical-basolateral sorting assay. Ap, apical side; Bl, basolateral side. () MDCK/DKK1-FLAG cells cultured on a Transwell filter were stained with anti-DKK1 (green) and anti–E-cadherin (red, a basolateral marker) antibodies and DRAQ5 DNA Dye (nucleus, blue). () Different volumes (1, 2, and 5 μl) of conditioned medium from MDCK and MDCK/DKK1-FLAG cells were probed with anti-DKK1 antibody. ( and ) Outside diameter of MDCK and MDCK/DKK1-FLAG cysts cultured in 3D Matrigel was measured ( = 50) (). The cells were stained with the indicated antibodies and DRAQ5 DNA Dye (). Ki-67–positive rate was expressed as the percentage of Ki-67–staining cells in DRAQ5-staining cells per cyst ( = 50). Results are plotted as box and whiskers where the median is represented with a line, the box represents the 25th to 75th percentiles, and error bars show the 5th to 95th percentiles. * < 0.05; ** < 0.01 (2-tailed Student’s test). () MDCK cells were apically (Ap) or basolaterally (Bl) treated with 250 ng/ml DKK1, and then the cells were stained with anti–Ki-67 antibody (red) and DRAQ5 DNA Dye (blue). Ki-67–positive cells are expressed as the percentage of positively stained cells compared with total cells per field ( = 5 fields). NT, nontreatment. Results are shown as means ± SD of 3 independent experiments. ** < 0.01; NS, not significant (compared with the NT group, 2-tailed Student’s test). () Cell numbers of control MDCK, MDCK/DKK1-FLAG, MDCK/DKK1-FLAG-GPI, or MDCK/DKK1-SPCUT-FLAG cells were counted. SPCUT, signal peptide–deleted DKK1. Results are shown as means ± SD of 3 independent experiments. Scale bars: 20 μm (, , and ); 100 μm ().