Epigenetic regulators play critical roles in normal hematopoiesis, and the activity of these enzymes is frequently altered in hematopoietic cancers. The major type II protein arginine methyltransferase PRMT5 catalyzes the formation of symmetric dimethyl arginine and has been implicated in various cellular processes, including pluripotency and tumorigenesis. Here, we generated conditional KO mice to evaluate the contribution of PRMT5 to adult hematopoiesis. Loss of PRMT5 triggered an initial but transient expansion of hematopoietic stem cells (HSCs); however, deletion resulted in a concurrent loss of hematopoietic progenitor cells (HPCs), leading to fatal BM aplasia. PRMT5-specific effects on hematopoiesis were cell intrinsic and depended on PRMT5 methyltransferase activity. We found that PRMT5-deficient hematopoietic stem and progenitor cells exhibited severely impaired cytokine signaling as well as upregulation of p53 and expression of its downstream targets. Together, our results demonstrate that PRMT5 plays distinct roles in the behavior of HSCs compared with HPCs and is essential for the maintenance of adult hematopoietic cells.

PRMT5 functions in HSCs are cell intrinsic and require the methyltransferase activity of PRMT5. 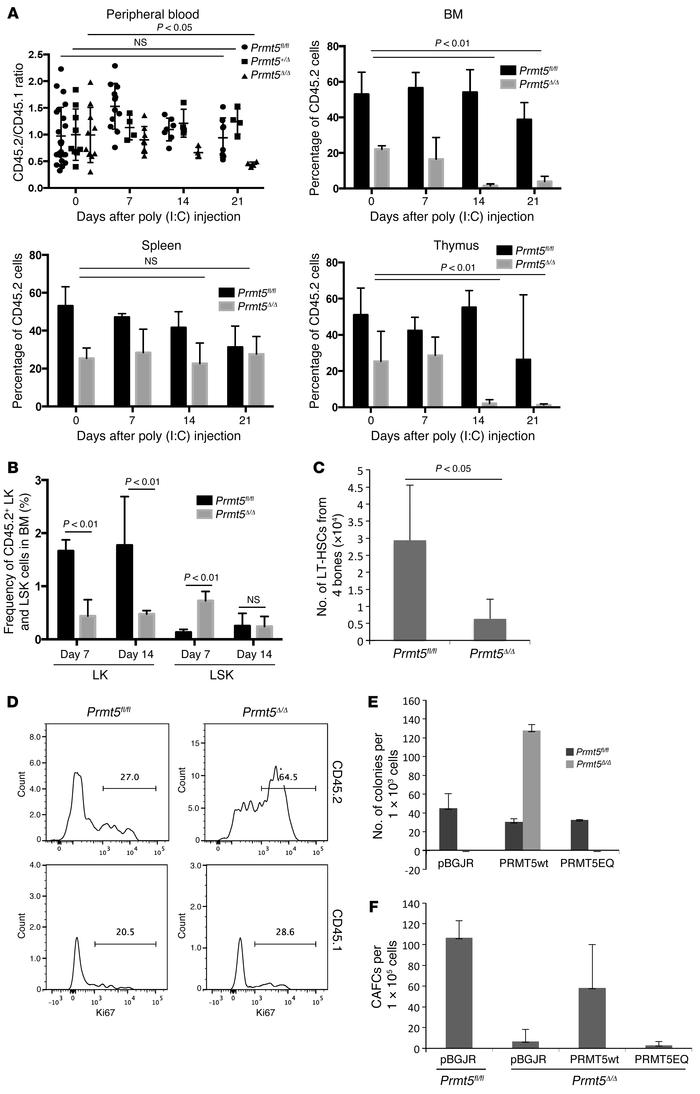 () CD45.2 BM cells isolated from either , , or mice were transplanted into recipient mice, together with WT CD45.1 BM cells. The ratio of CD45.2 to CD45.1 in peripheral blood mononuclear cells and the percentages of CD45.2 cells in BM, spleen, and thymus were determined by FACS analysis 7, 14, and 21 d.p.i. ( ≥4). () The frequency of CD45.2+ LK and LSK cells in BM from transplanted mice was determined by FACS analysis 7 and 14 d.p.i. ( = 5). () The absolute number of CD45.2 LT-HSCs (CD48–CD150+ LSK cells) in the transplanted mice 14 d.p.i. was calculated and plotted as the mean ± SD ( = 4). () The percentage of Ki67+ LT-HSCs in CD45.2 and CD45.1 BM cells was determined by FACS analysis. Results are representative of 2 independent transplantation experiments, with 3 to 4 mice per group in each experiment. () CFU assays were performed using day-7 BM cells transduced with either empty lentivirus (pBGJR) or viruses expressing PRMT5wt or PRMT5EQ proteins. GFP+ cells were flow sorted and plated in methylcellulose cultures in duplicate. Colonies were scored 7 days after plating. Results are representative of 3 independent experiments using cells from 2 mice of the same genotype pulled together for viral transduction. () CAFC assays were performed using day-5 BM cells isolated from or mice. Cells were transduced with pBGJR or PRMT5wt-, or PRMT5EQ-expressing lentiviruses and were cocultured with MS5 cells in the presence of 0.1 μM 4-OHT. The number of cobblestone areas at the end of the coculture is plotted as the mean ± SD ( = 3). All values were determined by a 2-tailed Student’s test.