Our understanding of the role of myeloid-derived suppressor cells (MDSCs) in cancer is becoming increasingly complex. In addition to their eponymous role in suppressing immune responses, they directly support tumor growth, differentiation, and metastasis in a number of ways that are only now beginning to be appreciated. It is because of this increasingly complex role that these cells may become an important factor in the treatment of human cancer. In this Review, we discuss the most pertinent and controversial issues of MDSC biology and their role in promoting cancer progression and highlight how these cells may be used in the clinic, both as prognostic factors and as therapeutic targets. 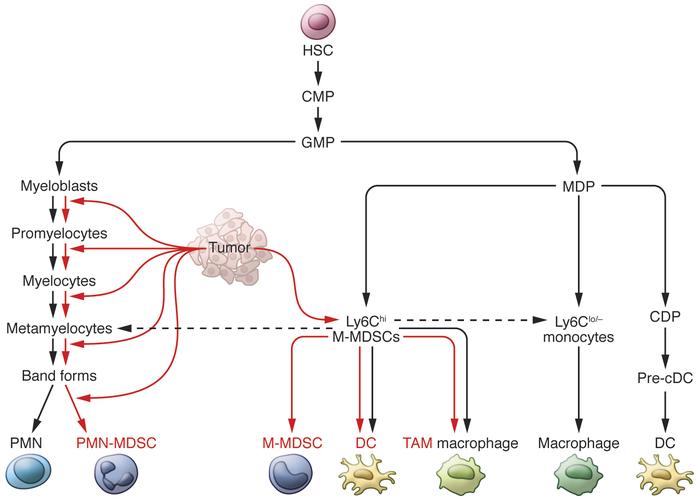 Differentiation of neutrophils and mononuclear cells in naive mice is shown by black arrows. Hematopoietic stem cells (HSC) differentiate into common myeloid progenitors (CMP), then into granulocyte-macrophage progenitors (GMP), which give rise to mature neutrophils via sequential steps of differentiation involving myeloblasts, promyelocytes, myelocytes, metamyelocytes, and band forms. Differentiation of macrophages and DCs involves macrophage/DC progenitors (MDP), DC progenitors (CDP), and pre-cDCs as well as several types of monocytes. The most prominent are Ly6C+ inflammatory monocytes and Ly6C– patrolling monocytes. Differentiation of myeloid cells in tumor-bearing mice is shown by red arrows. Tumor-derived signals affect all steps of granulocytic and monocytic cell differentiation, causing expansion of pathologically activated PMN-MDSCs and Ly6C+ M-MDSCs. During tumorigenesis, these cells become more prevalent in bone marrow and spleen than in their nonsuppressive counterparts. M-MDSCs acquire the ability to differentiate to PMN-MDSCs and, at the tumor site, differentiate to TAMs and DCs. The dashed line represents pathways that are not yet firmly established.