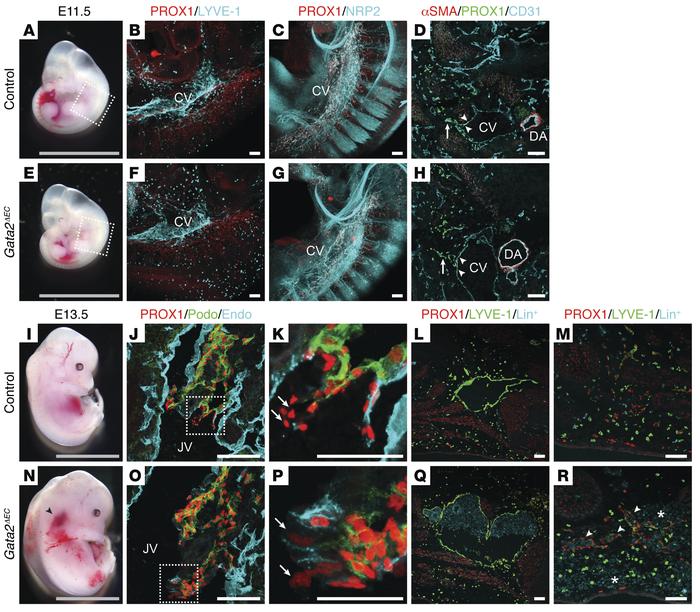 E11.5 embryos appear phenotypically normal ( and ). Whole-mount immunostaining for PROX1 (red) and LYVE-1 or NRP2 (cyan) demonstrated that PROX1-positive lymphatic endothelial progenitor cells are specified and migrate away from the cardinal veins of embryos ( and ). Immunostaining of transverse sections for α smooth muscle actin (αSMA; red), PROX1 (green), and CD31 (cyan) confirmed PROX1 expression in lymphatic endothelial progenitor cells of the cardinal veins of embryos ( and ; arrowheads) and migration of these cells from the veins ( and , arrows). Boxed regions in – correspond to areas shown in , , , and . E13.5 embryos exhibit severe edema, pooling of blood in the jugular region (, arrowhead), and focal dermal hemorrhages (, asterisks), compared with control littermates (Cre-negative;; and ). LVVs appeared multi-layered () with reduced PROX1 levels in the venous leaflets (Podoplanin-negative, Endomucin-low) of embryos (, arrows) compared with controls ( and ). PROX1 levels in lymphatic leaflets (Podoplanin-positive, Endomucin-negative) of embryos were not substantially altered ( and ). Jugular lymph sacs () and dermal lymphatic vessels (, arrowheads) were enlarged and blood-filled in embryos, phenotypes not observed in control embryos ( and ). Magnified images of boxed regions in and are shown in and , respectively. Gray scale bars: 5 mm. White scale bars: 50 μm ( and ) or 100 μm (all panels excluding and ). CV, cardinal vein; DA, dorsal aorta; JV, jugular vein; Lin+, APC mouse lineage antibody cocktail used to detect hematopoietic cells.