Individuals with an inherited deficiency in gonadotropin-releasing hormone (GnRH) have impaired sexual reproduction. Previous genetic linkage studies and sequencing of plausible gene candidates have identified mutations associated with inherited GnRH deficiency, but the small number of affected families and limited success in validating candidates have impeded genetic diagnoses for most patients. Using a combination of exome sequencing and computational modeling, we have identified a shared point mutation in semaphorin 3E () in 2 brothers with Kallmann syndrome (KS), which causes inherited GnRH deficiency. Recombinant wild-type SEMA3E protected maturing GnRH neurons from cell death by triggering a plexin D1–dependent (PLXND1-dependent) activation of PI3K-mediated survival signaling. In contrast, recombinant SEMA3E carrying the KS-associated mutation did not protect GnRH neurons from death. In murine models, lack of either SEMA3E or PLXND1 increased apoptosis of GnRH neurons in the developing brain, reducing innervation of the adult median eminence by GnRH-positive neurites. GnRH neuron deficiency in male mice was accompanied by impaired testes growth, a characteristic feature of KS. Together, these results identify as an essential gene for GnRH neuron development, uncover a neurotrophic function for SEMA3E in the developing brain, and elucidate SEMA3E/PLXND1/PI3K signaling as a mechanism that prevents GnRH neuron deficiency.

PLXND1 is expressed during GnRH neuron migration in the mouse. 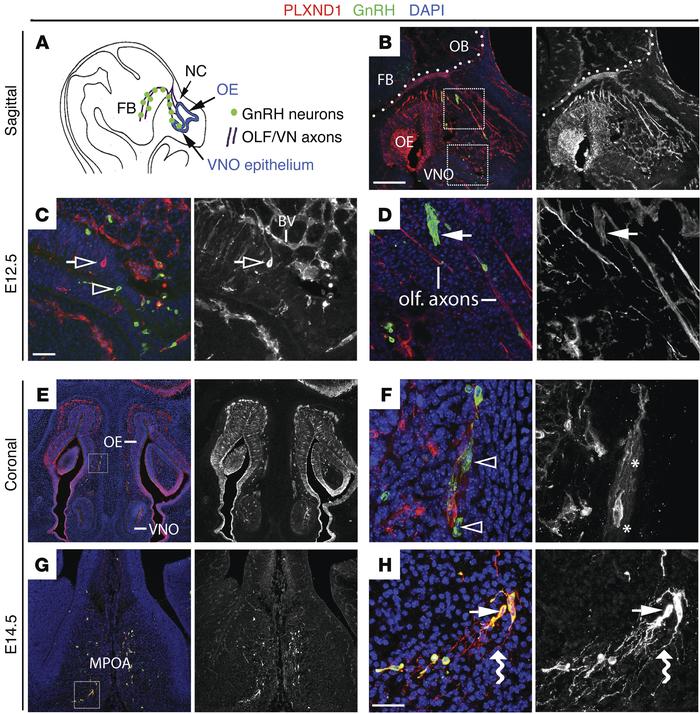 () Schematic representation of an embryonic mouse head to illustrate the migration of GnRH neurons (green dots) from the olfactory (OE) and VNO epithelia (blue) along OLF and VN axons (purple) through the nasal compartment (NC) into the forebrain (FB). (–) Sagittal and coronal sections of mouse heads at the indicated developmental stages, immunolabeled for GnRH and PLXND1; nuclei were counterstained with DAPI. Higher-magnification images of the areas indicated with dotted squares in are shown in panels and , and for and in and , respectively. Adjacent to each panel in –, the corresponding single channels for PLXND1 are shown in grayscale. In , clear arrows indicate PLXND1-positive, GnRH-negative cells, and clear arrowheads indicate examples of GnRH-positive, PLXND1-negative cells in the OE. Solid arrows in indicate GnRH neurons with low levels of PLXND1 in association with OLF axons with high levels of PLXND1. In , clear arrowheads indicate PLXND1-negative GnRH neurons (their position is indicated with an asterisk). In , PLXND1-positive GnRH neurons in the MPOA and their neurites are indicated with straight and wavy arrows, respectively. Scale bars: 150 μm (, , and ); 50 μm (, , and ); 25 μm ().