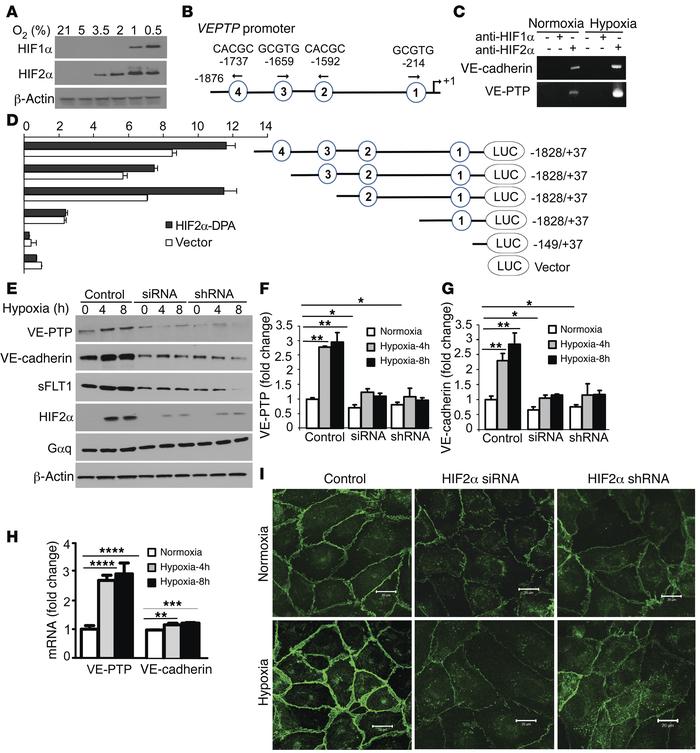 () HLMVECs were exposed to varying concentrations of O2 for 8 hours. Expression of HIF1α and HIF2α was assessed by WB. () Representation of the promoter region. HREs are shown by circled numbers, and their sequences are displayed. () HLMVECs were exposed to normoxia or 1% O2 for 8 hours. A ChIP assay was performed to amplify the and VE-cadherin promoters. () 293T cells were transfected with an HIF2α-DPA expression plasmid containing luciferase reporter constructs. Luciferase values were normalized to β-gal values. A schematic representation of corresponding deletion constructs is presented in the right panel. () HLMVECs infected with lentiviral HIF2α siRNA/shRNA were exposed to normoxia or 1% O2. Expression of VE-cadherin, VE-PTP, and HIF2α was assessed by WB. (-) Quantification of VE-PTP () and VE-cadherin () protein levels. () HLMVECs were exposed to normoxia or 1% O2. Expression of and VE-cadherin at the mRNA level was assessed by quantitative PCR. () AJ integrity of HLMVECs was examined by VE-cadherin immunostaining using confocal microscopy. Scale bars: 20 μm. = 3/group (–). Blot images were derived from samples run on parallel gels. * < 0.05; ** < 0.01; *** < 0.005; **** < 0.001 by Student’s test.