Astrocytes perform critical non–cell autonomous roles following CNS injury that involve either neurotoxic or neuroprotective effects. Yet the nature of potential prosurvival cues has remained unclear. In the current study, we utilized the close interaction between astrocytes and retinal ganglion cells (RGCs) in the eye to characterize a secreted neuroprotective signal present in retinal astrocyte conditioned medium (ACM). Rather than a conventional peptide neurotrophic factor, we identified a prominent lipid component of the neuroprotective signal through metabolomics screening. The lipoxins LXA4 and LXB4 are small lipid mediators that act locally to dampen inflammation, but they have not been linked directly to neuronal actions. Here, we determined that LXA4 and LXB4 are synthesized in the inner retina, but their levels are reduced following injury. Injection of either lipoxin was sufficient for neuroprotection following acute injury, while inhibition of key lipoxin pathway components exacerbated injury-induced damage. Although LXA4 signaling has been extensively investigated, LXB4, the less studied lipoxin, emerged to be more potent in protection. Moreover, LXB4 neuroprotection was different from that of established LXA4 signaling, and therapeutic LXB4 treatment was efficacious in a chronic model of the common neurodegenerative disease glaucoma. Together, these results identify a potential paracrine mechanism that coordinates neuronal homeostasis and inflammation in the CNS. 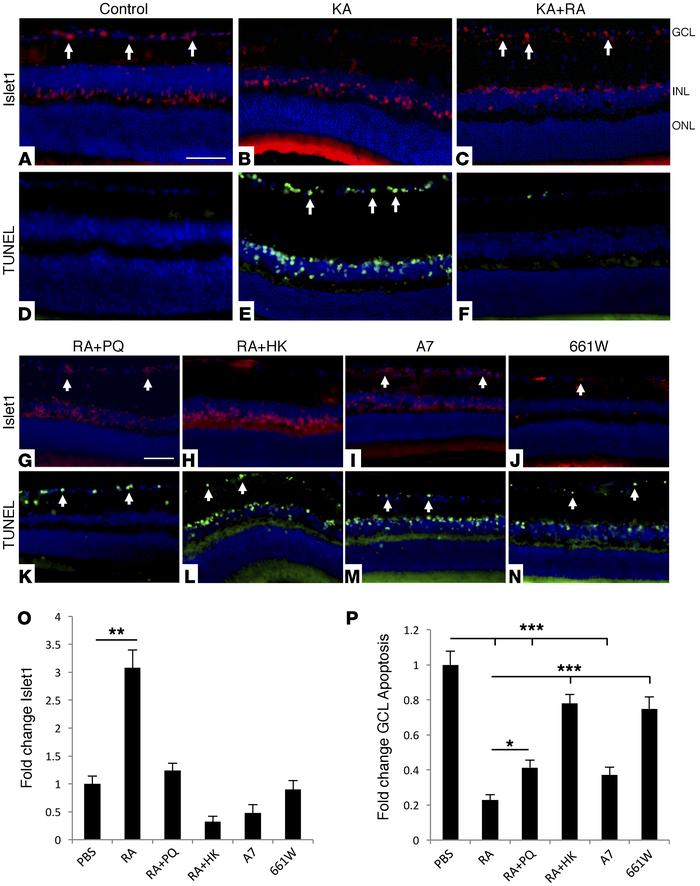 (–) Transplantation of RAs increased survival of GCL and INL neurons following KA-induced injury, compared with PBS-injected controls (Islet1: red, arrows). INL, inner nuclear layer; ONL, outer nuclear layer. (–) Adjacent sections were TUNEL stained (green, arrows), and show a complementary pattern, with reduced apoptosis GCL and INL in eyes with transplanted RAs. (–) Rescue of Islet1-positive neurons was reduced or absent when RAs were prestressed by treatment with 300 μM PQ (RA+PQ) or heat killed (RA+HK). ( and ) Transplants of A7 or 661W cells were also not protective. (–) Corresponding TUNEL staining showed higher GCL or INL apoptosis in the controls compared with RA transplants. () Quantification of Islet1 results for each group, showing significant protection of GCL neurons by RAs that is absent in each of the controls ( = 10). () Quantification of TUNEL results for each group, showing a significant reduction of apoptosis by RAs that is lower or absent in the controls ( = 10). Scale bars: 50 μm. * < 0.05; ** < 0.01; *** < 0.005 compared with PBS. Bars represent SEM. Statistical analyses were performed by 1-way ANOVA with TUKEY post-hoc test.