Gut/brain axis and the microbiota

Gut/brain axis and the microbiota

Tremendous progress has been made in characterizing the bidirectional interactions between the central nervous system, the enteric nervous system, and the gastrointestinal tract. A series of provocative preclinical studies have suggested a prominent role for the gut microbiota in these gut-brain interactions. Based on studies using rodents raised in a germ-free environment, the gut microbiota appears to influence the development of emotional behavior, stress- and pain-modulation systems, and brain neurotransmitter systems. Additionally, microbiota perturbations by probiotics and antibiotics exert modulatory effects on some of these measures in adult animals. Current evidence suggests that multiple mechanisms, including endocrine and neurocrine pathways, may be involved in gut microbiota–to–brain signaling and that the brain can in turn alter microbial composition and behavior via the autonomic nervous system. Limited information is available on how these findings may translate to healthy humans or to disease states involving the brain or the gut/brain axis. Future research needs to focus on confirming that the rodent findings are translatable to human physiology and to diseases such as irritable bowel syndrome, autism, anxiety, depression, and Parkinson’s disease. 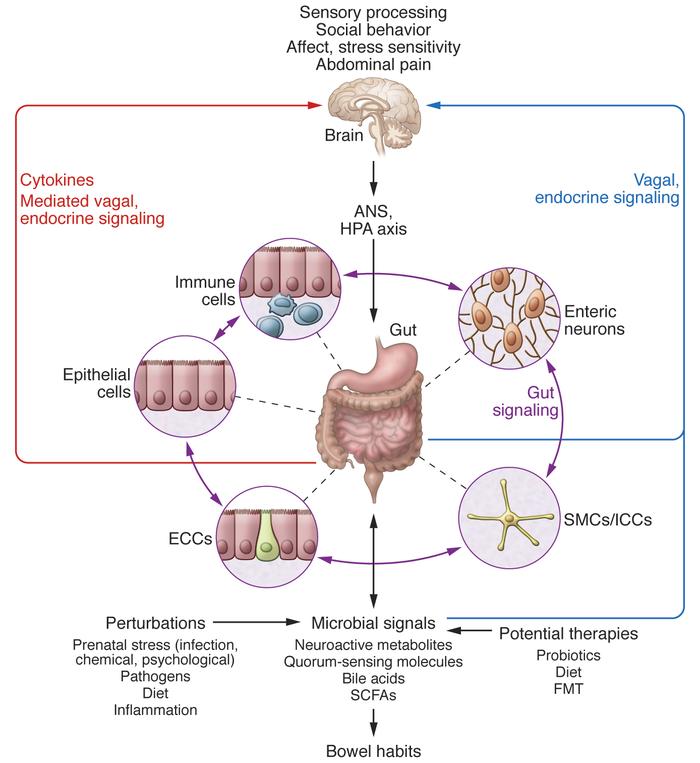 A network of specialized target/transducer cells in the gut wall functions as an interface between the microbiota and the host lumen. In response to external and bodily demands, the brain modulates these specialized cells within this network via the branches of the ANS (sympathetic and parasympathetic/vagal efferents) and the HPA axis. Such modulation can be transient, such as in response to transient perturbations, or long lasting, such as in response to chronically altered brain output. The microbiota is in constant bidirectional communication with this interface via multiple microbial signaling pathways, and this communication is modulated in response to perturbations of the microbiota or the brain. The integrated output of the gut microbial–brain interface is transmitted back to the brain via multiple afferent signaling pathways, including endocrine (metabolites, cytokines, and microbial signaling molecules) and neurocrine (vagal and spinal afferents). While acute alterations in this interoceptive feedback can result in transient functional brain changes (GI infections), chronic alterations are associated with neuroplastic brain changes. Potential therapies aim to normalize altered microbiota signaling to the ENS and central nervous system. FMT, fecal microbial transplant; ICC, interstitial cell of Cajal.