Mutations within the gene encoding the DNA helicase RECQL4 underlie the autosomal recessive cancer-predisposition disorder Rothmund-Thomson syndrome, though it is unclear how these mutations lead to disease. Here, we demonstrated that somatic deletion of causes a rapid bone marrow failure in mice that involves cells from across the myeloid, lymphoid, and, most profoundly, erythroid lineages. Apoptosis was markedly elevated in multipotent progenitors lacking RECQL4 compared with WT cells. While the stem cell compartment was relatively spared in RECQL4-deficent mice, HSCs from these animals were not transplantable and even selected against. The requirement for RECQL4 was intrinsic in hematopoietic cells, and loss of RECQL4 in these cells was associated with increased replicative DNA damage and failed cell-cycle progression. Concurrent deletion of p53, which rescues loss of function in animals lacking the related helicase BLM, did not rescue BM phenotypes in RECQL4-deficient animals. In contrast, hematopoietic defects in cells from ΔΔ mice were fully rescued by a RECQL4 variant without RecQ helicase activity, demonstrating that RECQL4 maintains hematopoiesis independently of helicase activity. Together, our data indicate that RECQL4 participates in DNA replication rather than genome stability and identify RECQL4 as a regulator of hematopoiesis with a nonredundant role compared with other RecQ helicases. 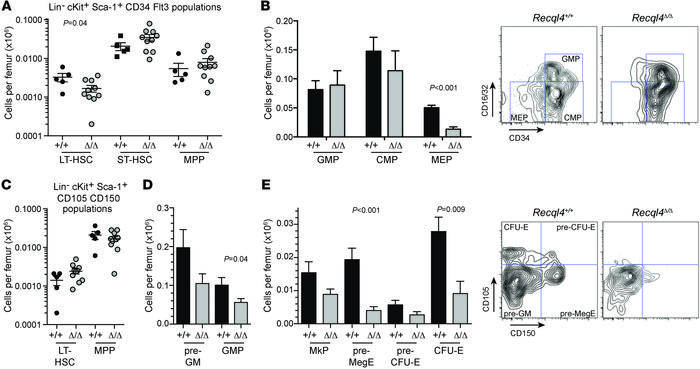