The two compositionally distinct extracellular cochlear fluids, endolymph and perilymph, are separated by tight junctions that outline the scala media and reticular lamina. Mutations in (also known as ), which encodes a tricellular tight junction protein known as tricellulin, lead to nonsyndromic hearing loss (DFNB49). We generated a knockin mouse that carries a mutation orthologous to the coding mutation linked to DFNB49 hearing loss in humans. Tricellulin was absent from the tricellular junctions in the inner ear epithelia of the mutant animals, which developed rapidly progressing hearing loss accompanied by loss of mechanosensory cochlear hair cells, while the endocochlear potential and paracellular permeability of a biotin-based tracer in the stria vascularis were unaltered. Freeze-fracture electron microscopy revealed disruption of the strands of intramembrane particles connecting bicellular and tricellular junctions in the inner ear epithelia of tricellulin-deficient mice. These ultrastructural changes may selectively affect the paracellular permeability of ions or small molecules, resulting in a toxic microenvironment for cochlear hair cells. Consistent with this hypothesis, hair cell loss was rescued in tricellulin-deficient mice when generation of normal endolymph was inhibited by a concomitant deletion of the transcription factor, . Finally, comprehensive phenotypic screening showed a broader pathological phenotype in the mutant mice, which highlights the non-redundant roles played by tricellulin.

The p.Arg497* mutation does not affect the maturation of voltage-gated ion conductances in OHCs. 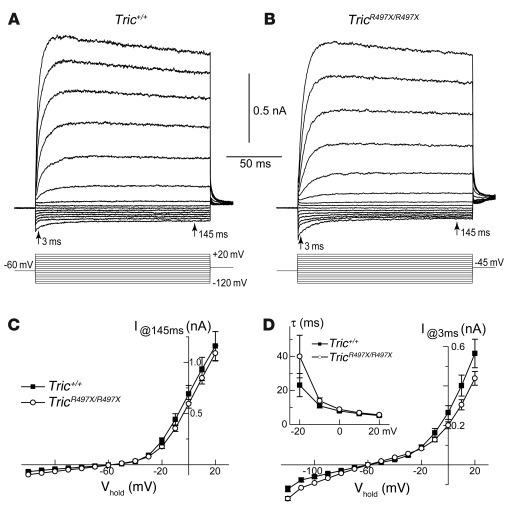 () Whole-cell patch-clamp recordings of the outward and inward ionic conductances in OHCs of cochlear explants of mice. The membrane currents (top traces) were evoked by depolarizing and hyperpolarizing voltage steps (bottom traces) of various step potentials from –120 mV to +20 mV. OHCs were maintained at a holding potential of –60 mV between acquisitions. () Whole-cell currents in OHCs of the mice were comparable to those observed in OHCs of wild-type littermates. () The steady-state currents measured at 145 ms after onset of the voltage step were identical in OHCs of (white circles) and (black circles) mice. () Statistically nonsignificant differences in the speed of activation of voltage-gated conductances. The current response measured at 3 ms after beginning of the voltage step is shown. The differences in responses (mean ± SEM) of (white circles, = 21) and (black circles, = 15) OHCs were largely nonsignificant except at 1 point at –120 mV ( < 0.05). The inset shows the time constant (τ) of current activation. The same recordings contributed to and . The age of the cultured organ of Corti was P3 plus 3–5 days in vitro.