The recently completed HIV prevention trials network study 052 is a landmark collaboration demonstrating that HIV transmission in discordant couples can be dramatically reduced by treating the infected individual with antiretroviral therapy (ART). However, the cellular and virological events that occur in the female reproductive tract (FRT) during ART that result in such a drastic decrease in transmission were not studied and remain unknown. Here, we implemented an in vivo model of ART in BM/liver/thymus (BLT) humanized mice in order to better understand the ability of ART to prevent secondary HIV transmission. We demonstrated that the entire FRT of BLT mice is reconstituted with human CD4+ cells that are shed into cervicovaginal secretions (CVS). A high percentage of the CD4+ T cells in the FRT and CVS expressed CCR5 and therefore are potential HIV target cells. Infection with HIV increased the numbers of CD4+ and CD8+ T cells in CVS of BLT mice. Furthermore, HIV was present in CVS during infection. Finally, we evaluated the effect of ART on HIV levels in the FRT and CVS and demonstrated that ART can efficiently suppress cell-free HIV-RNA in CVS, despite residual levels of HIV-RNA+ cells in both the FRT and CVS. 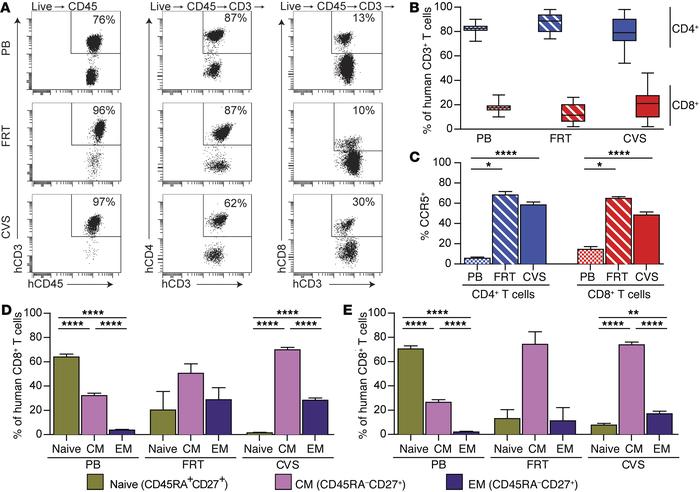