The effects of aging on the immune system are manifest at multiple levels that include reduced production of B and T cells in bone marrow and thymus and diminished function of mature lymphocytes in secondary lymphoid tissues. As a result, elderly individuals do not respond to immune challenge as robustly as the young. An important goal of aging research is to define the cellular changes that occur in the immune system and the molecular events that underlie them. Considerable progress has been made in this regard, and this information has provided the rationale for clinical trials to rejuvenate the aging immune system.

Effects of aging on HSCs and lymphocyte progenitors. 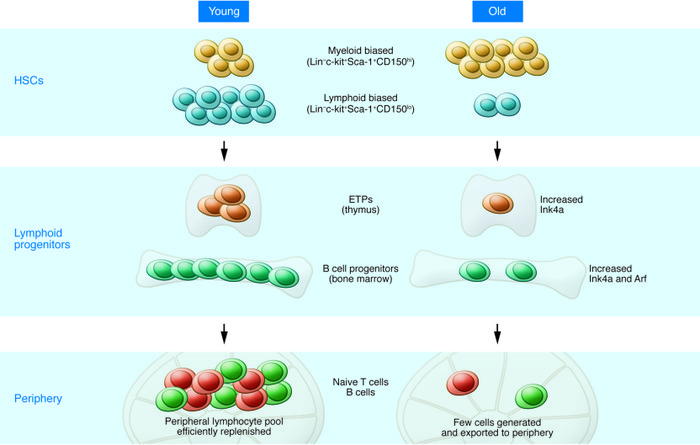 Lymphopoiesis in the young (left) is characterized by robust B and T cell production in the bone marrow and thymus. The pool of HSCs includes a relatively high number of lymphoid-biased stem cells that efficiently generate lymphoid progenitors with high proliferative potential. However, with increasing age (right), the number of lymphoid-biased HSCs declines and myeloid-biased stem cells predominate, contributing to the reduced numbers of lymphoid progenitors. In addition, B cell progenitors in the bone marrow and T cell progenitors in the thymus exhibit reduced rates of proliferation and higher levels of apoptosis compared with their young counterparts. The increased expression of and in pro-B cells and in ETPs contribute to this decreased proliferation/increased apoptosis. The decline in primary lymphopoiesis in turn results in a reduced number of naive cells that migrate to secondary lymphoid tissues such as the spleen.