Acetaminophen (APAP) overdose is the predominant cause of acute liver failure in the United States. Toxicity begins with a reactive metabolite that binds to proteins. In rodents, this leads to mitochondrial dysfunction and nuclear DNA fragmentation, resulting in necrotic cell death. While APAP metabolism is similar in humans, the later events resulting in toxicity have not been investigated in patients. In this study, levels of biomarkers of mitochondrial damage (glutamate dehydrogenase [GDH] and mitochondrial DNA [mtDNA]) and nuclear DNA fragments were measured in plasma from APAP-overdose patients. Overdose patients with no or minimal hepatic injury who had normal liver function tests (LTs) (referred to herein as the normal LT group) and healthy volunteers served as controls. Peak GDH activity and mtDNA concentration were increased in plasma from patients with abnormal LT. Peak nuclear DNA fragmentation in the abnormal LT cohort was also increased over that of controls. Parallel studies in mice revealed that these plasma biomarkers correlated well with tissue injury. Caspase-3 activity and cleaved caspase-3 were not detectable in plasma from overdose patients or mice, but were elevated after TNF-induced apoptosis, indicating that APAP overdose does not cause apoptosis. Thus, our results suggest that mitochondrial damage and nuclear DNA fragmentation are likely to be critical events in APAP hepatotoxicity in humans, resulting in necrotic cell death. 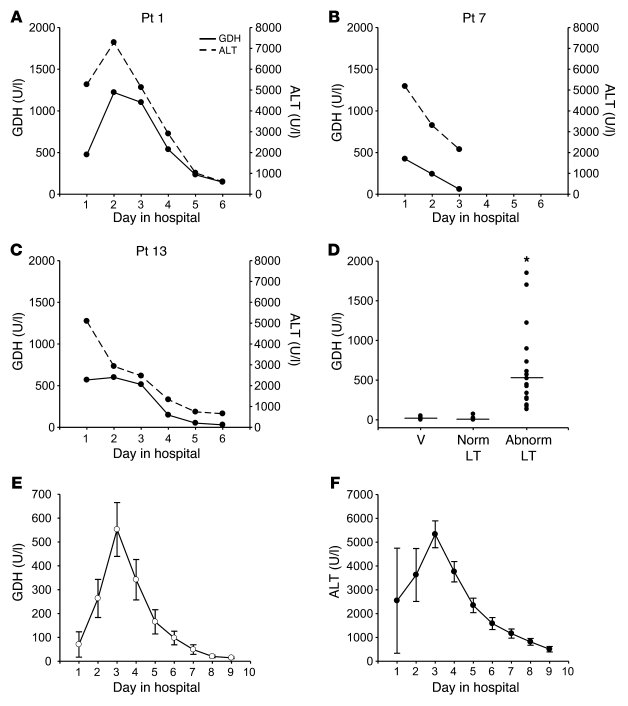 GDH activity was measured in the plasma from APAP-overdose patients throughout their time in the hospital. (–) Time course data from 3 representative patients showing both GDH and ALT activity. () Plasma GDH activity at the time of peak ALT in healthy volunteers (V), normal LT group (Norm LT), and abnormal LT group (Abnorm LT). () Average plasma GDH activity over time for the patients with abnormal LT results. () Average plasma ALT activity over time for patients with abnormal LT results. Data are expressed as mean ± SEM for = 20. * < 0.05 compared with healthy volunteers.