Both insulin resistance and hyperinsulinemia have been reported to be independent risk factors for cardiovascular diseases. However, little is known regarding insulin signaling in the vascular tissues in insulin-resistant states. In this report, insulin signaling on the phosphatidylinositol 3-kinase (PI 3-kinase) and mitogen-activated protein (MAP) kinase pathways were compared in vascular tissues of lean and obese Zucker (fa/fa) rats in both ex vivo and in vivo studies. Ex vivo, insulin-stimulated tyrosine phosphorylation of insulin receptor β subunits (IRβ) in the aorta and microvessels of obese rats was significantly decreased compared with lean rats, although the protein levels of IRβ in the 2 groups were not different. Insulin-induced tyrosine phosphorylation of insulin receptor substrates 1 and 2 (IRS-1 and IRS-2) and their protein levels were decreased in the aorta of obese rats compared with lean rats. The association of p85 subunit to the IRS proteins and the IRS-associated PI 3-kinase activities stimulated by insulin in the aorta of obese rats were significantly decreased compared with the lean rats. In addition, insulin-stimulated serine phosphorylation of Akt, a downstream kinase of PI 3-kinase pathway, was also reduced significantly in isolated microvessels from obese rats compared with the lean rats. In euglycemic clamp studies, insulin infusion greatly increased tyrosine phosphorylation of IRβ- and IRS-2–associated PI 3-kinase activity in the aorta of lean rats, but only slight increases were observed in obese rats. In contrast, insulin stimulated tyrosine phosphorylation of MAP kinase (ERK-1/2) equally in isolated microvessels of lean and obese rats, although basal tyrosine phosphorylation of ERK-1/2 was higher in the obese rats. To our knowledge, these data provided the first direct measurements of insulin signaling in the vascular tissues, and documented a selective resistance to PI 3-kinase (but not to MAP kinase pathway) in the vascular tissues of obese Zucker rats. 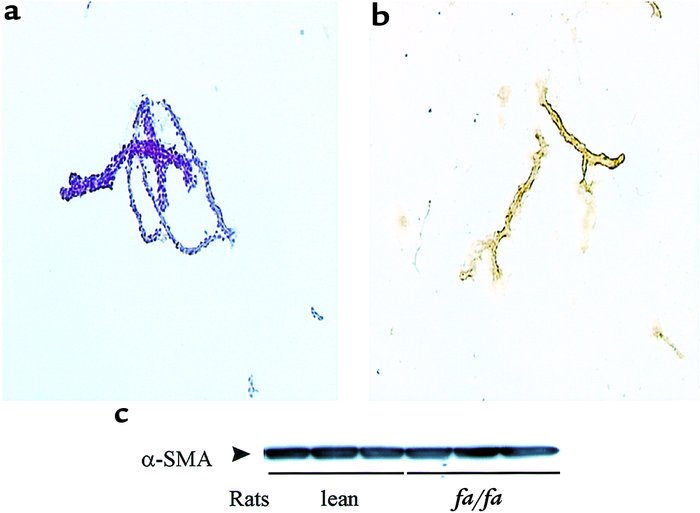 Microvessels isolated from rat epididymal fat-pads. Isolated epididymal fat-pads were digested with collagenase and homogenized as described in Methods. The purity of the isolated microvessels were verified by histochemical staining with H&E () and immunohistochemical staining with factor VIII antibody (). Immunoblotting with antibody against vascular α-SMA was used to compare the quality of isolated microvessels from lean and obese rats ().