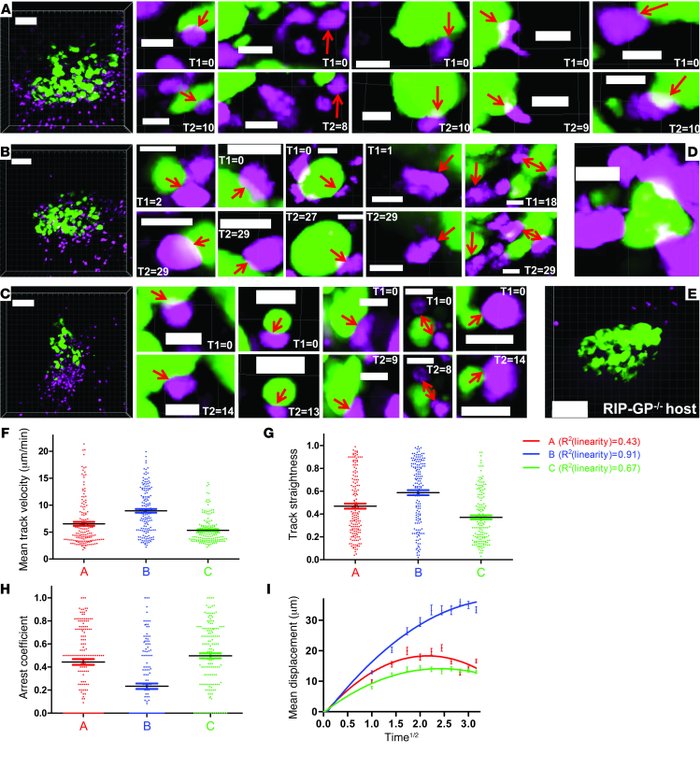 (–) Pancreatic islet (green, GFP) and infiltrating CTL (magenta, CFP) populations from 3 individual mice were imaged at the highest digital magnification that would fully encompass β cell mass and associated CTLs. Dimensions: , / = 0.79/ = 5/ = 22; , / = 0.88/ = 5/ = 20; , / = 0.91/ = 5/ = 25. Acquisition times are 10 minutes, 29 minutes, and 14 minutes, respectively, with = 60 s. corresponds to Supplemental Video 11. Five representative, high-resolution examples are included for each series that document CTL–β cell interactions (first frame [T1 in min] and last frame of contact [T2 in min]). Supplemental Videos 12 and 13 correspond to magnified zones from and , respectively. () Enlarged region from showing a β cell that is almost entirely engulfed by CTLs. () Control experiment using mice with fluorescently labeled but antigen-deficient β cells. A small exocrine population of CTLs can be observed. One frame is shown from a 14-minute sequence during which none of the CTLs shown here infiltrated the islet (representative of duplicate control experiments). Dimensions: / = 0.75/ = 5/ = 24. (–) Kinetic CTL population parameters obtained via 3D cellular-tracking analysis in Imaris. Color coding correlates with the image sequences in –. Curves in were generated via nonlinear regression analysis in GraphPad and, in combination with values, reveal deviation from linearity and thus constrained motility of the intra-islet CTL population. Horizontal bars are means and associated error bars represent the SEM. Scale bars: 80 μm (– and ); 10 μm ().