β3 integrins have been implicated in a wide variety of functions, including platelet aggregation and thrombosis (αIIbβ3) and implantation, placentation, angiogenesis, bone remodeling, and tumor progression (αvβ3). The human bleeding disorder Glanzmann thrombasthenia (GT) can result from defects in the genes for either the αIIb or the β3 subunit. In order to develop a mouse model of this disease and to further studies of hemostasis, thrombosis, and other suggested roles of β3 integrins, we have generated a strain of β3-null mice. The mice are viable and fertile, and show all the cardinal features of GT (defects in platelet aggregation and clot retraction, prolonged bleeding times, and cutaneous and gastrointestinal bleeding). Implantation appears to be unaffected, but placental defects do occur and lead to fetal mortality. Postnatal hemorrhage leads to anemia and reduced survival. These mice will allow analyses of the other suggested functions of β3 integrins and we report that postnatal neovascularization of the retina appears to be β3-integrin–independent, contrary to expectations from inhibition experiments. 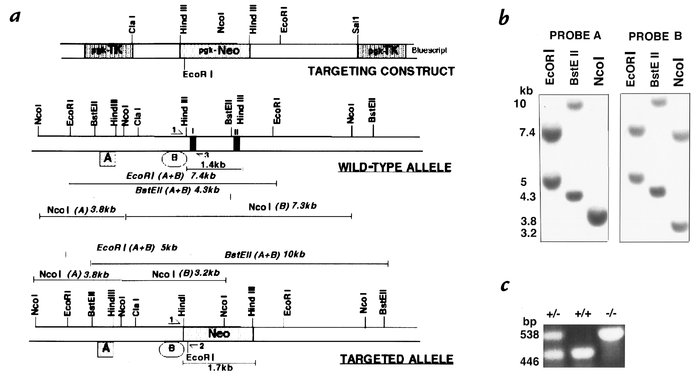 Targeting strategy, Southern blots and PCR analysis of ES cells and mice lacking the β3-integrin gene. () Structure of β3 targeting construct, wild-type β3 allele and targeted β3 allele. Exons are indicated as black boxes. The 1.7 kb pgk-neomycin-resistance cassette replaces a 1.4 kb dIII fragment of the β3-gene including exons I and II. Pgk-thymidine kinase genes were used for negative selection. () Southern blot analysis of RI, EII and -digested genomic DNA from a representative targeted clone (111). Probe A lay 5′ of the targeting construct and probe B lay inside it (). () PCR analysis of wild-type, heterozygous and β3-null tail DNA used to screen offspring. Primer locations are indicated by half arrows in A and give products of 446 bp with primers 1 and 3 (wild-type) or 538 bp with primers 1 and 2 (mutant).