Rapamycin is an antibiotic inhibiting eukaryotic cell growth and proliferation by acting on target of rapamycin (TOR) kinase. Mammalian TOR (mTOR) is thought to work through 2 independent complexes to regulate cell size and cell replication, and these 2 complexes show differential sensitivity to rapamycin. Here we combine functional genetics and pharmacological treatments to analyze rapamycin-sensitive mTOR substrates that are involved in cell proliferation and tissue regeneration after partial hepatectomy in mice. After hepatectomy, hepatocytes proliferated rapidly, correlating with increased S6 kinase phosphorylation, while treatment with rapamycin derivatives impaired regeneration and blocked S6 kinase activation. In addition, genetic deletion of S6 kinase 1 (S6K1) caused a delay in S phase entry in hepatocytes after hepatectomy. The proliferative defect of S6K1-deficient hepatocytes was cell autonomous, as it was also observed in primary cultures and hepatic overexpression of S6K1-rescued proliferation. We found that S6K1 controlled steady-state levels of cyclin D1 (Ccnd1) mRNA in liver, and cyclin D1 expression was required to promote hepatocyte cell cycle. Notably, in vivo overexpression of cyclin D1 was sufficient to restore the proliferative capacity of S6K-null livers. The identification of an S6K1-dependent mechanism participating in cell proliferation in vivo may be relevant for cancer cells displaying high mTOR complex 1 activity and cyclin D1 accumulation. 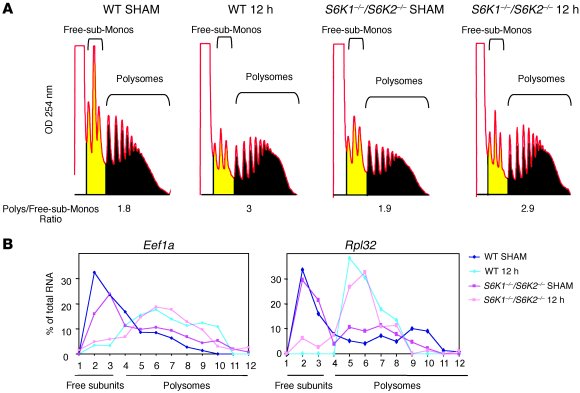 () Liver polysomal profile of the indicated genotypes in sham-operated mice or 12 hours after PH. The area under the curve is indicated in yellow or black, and the ratio of the polysome/free-subunits plus monosomes (Free-sub-Monos) is shown. () Curves represent the Northern blot quantification of or mRNA in liver of the indicated genotypes of sham-operated mice or mice 12 hours after PH. The relative amount of or mRNA in each fraction is expressed as the percentage of the total in the polysome gradient.