Allergic asthma is characterized by airway hyperresponsiveness, inflammation, and a cellular infiltrate dominated by eosinophils. Numerous epidemiological studies have related the exacerbation of allergic asthma with an increase in ambient inhalable particulate matter from air pollutants. This is because inhalable particles efficiently deliver airborne allergens deep into the airways, where they can aggravate allergic asthma symptoms. However, the cellular mechanisms by which inhalable particulate allergens (pAgs) potentiate asthmatic symptoms remain unknown, in part because most in vivo and in vitro studies exploring the pathogenesis of allergic asthma use soluble allergens (sAgs). Using a mouse model of allergic asthma, we found that, compared with their sAg counterparts, pAgs triggered markedly heightened pulmonary eosinophilia in allergen-sensitized mice. Mast cells (MCs) were implicated in this divergent response, as the differences in airway inflammatory responses provoked by the physical nature of the allergens were attenuated in MC-deficient mice. The pAgs were found to mediate MC-dependent responses by enhancing retention of pAg/IgE/FcεRI complexes within lipid raft–enriched, CD63+ endocytic compartments, which prolonged IgE/FcεRI-initiated signaling and resulted in heightened cytokine responses. These results reveal how the physical attributes of allergens can co-opt MC endocytic circuitry and signaling responses to aggravate pathological responses of allergic asthma in mice.

IgE/FcεRI complexes are retained within lipid raft–enriched domains of BMMCs following exposure to pAgs, but not to sAgs. 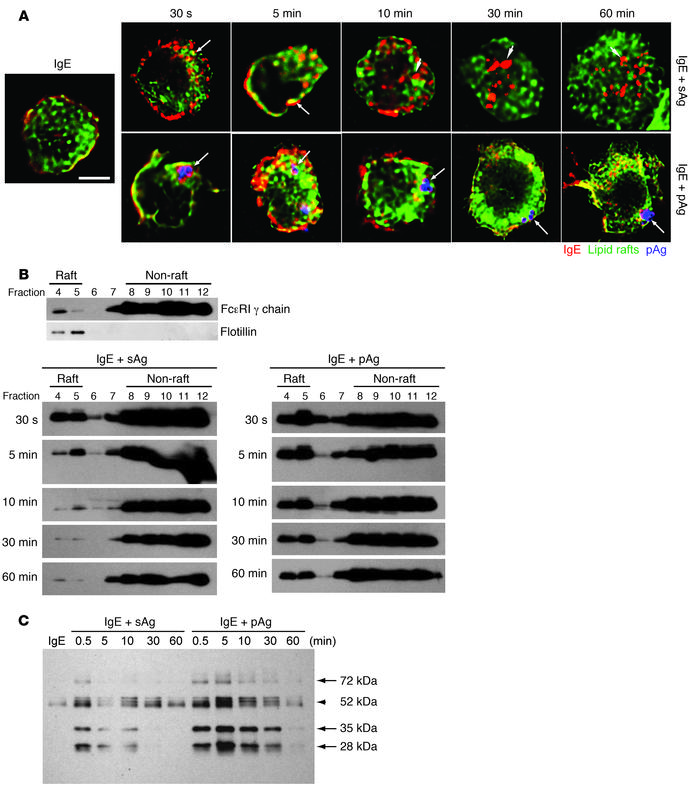 () Association of IgE/FcεRI complexes (red) with lipid rafts (green) at the indicated time points following exposure to sAgs or pAgs. Shown in blue are pAgs. Arrows denote examples of colocalization between IgE/FcεRI complexes and lipid raft–enriched regions. Arrowheads denote examples in which IgE/FcεRI complexes have separated from lipid raft–enriched compartments and no colocalization is evident. Scale bar: 5 μm. () Association of FcεRI-γ chain with lipid raft fractions in sensitized BMMCs before and at various time points after exposure to sAgs or pAgs. Cell fractions were obtained after sucrose gradient centrifugation and probed for FcεRI-γ chain on a Western blot. Distribution of FcεRI-γ chain in cell fractions prior to addition of allergen is also shown. Based on the location of flotillin-1, fractions 4 and 5 are defined as the lipid raft fractions. () Sucrose gradient fractions 4 and 5 were pooled and subjected to Western blot to detect tyrosine phosphorylation within lipid fractions of BMMCs at various time points after exposure to sAgs or pAgs. Arrows denote phosphorylated bands that appeared more intense in pAg- relative to sAg-stimulated cells. Arrowhead denotes a band for which differences between sAg- and pAg-stimulated cells was not marked. Images are representative of 3 separate experiments.