Sirtuins are a phylogenetically conserved NAD+-dependent protein deacetylase/ADP-ribosyltransferase family implicated in diverse biological processes. Several family members localize to mitochondria, the function of which is thought to determine the developmental potential of preimplantation embryos. We have therefore characterized the role of sirtuins in mouse preimplantation development under in vitro culture conditions. All sirtuin members were expressed in eggs, and their expression gradually decreased until the blastocyst stage. Treatment with sirtuin inhibitors resulted in increased intracellular ROS levels and decreased blastocyst formation. These effects were recapitulated by siRNA-induced knockdown of Sirt3, which is involved in mitochondrial energy metabolism, and in Sirt3–/– embryos. The antioxidant N-acetyl-L-cysteine and low-oxygen conditions rescued these adverse effects. When Sirt3-knockdown embryos were transferred to pseudopregnant mice after long-term culture, implantation and fetal growth rates were decreased, indicating that Sirt3-knockdown embryos were sensitive to in vitro conditions and that the effect was long lasting. Further experiments revealed that maternally derived Sirt3 was critical. Sirt3 inactivation increased mitochondrial ROS production, leading to p53 upregulation and changes in downstream gene expression. The inactivation of p53 improved the developmental outcome of Sirt3-knockdown embryos, indicating that the ROS-p53 pathway was responsible for the developmental defects. These results indicate that Sirt3 plays a protective role in preimplantation embryos against stress conditions during in vitro fertilization and culture.

Involvement of p53 in developmental arrest of Sirt3-deficient preimplantation embryos. 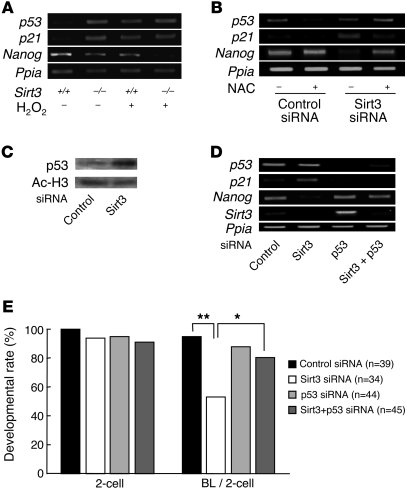 () and were upregulated in embryos as in H2O2-treated wild-type embryos. expression was decreased in embryos, and the decrease was enhanced by H2O2 stimulus. () Effects of Sirt3 knockdown and treatment with NAC on the expression of and its downstream genes. In Sirt3 siRNA–injected embryos, expression was upregulated, whereas expression was downregulated. These effects were blocked by NAC. () Western blotting analysis showing increased p53 protein levels in Sirt3-knockdown embryos at the morula stage. Signals for acetylated histone H3 (Ac-H3) served as an internal control. () Effects of p53 knockdown on Sirt3 siRNA–induced changes in the expression of genes downstream of p53. Sirt3 siRNA–induced upregulation and downregulation were blocked by siRNA-mediated p53 knockdown. expression served as an internal control in , , and . () Effects of p53 knockdown on preimplantation developmental arrest in Sirt3-knockdown embryos. The rate of blastocyst formation was significantly improved by coinjection with p53 siRNA. Data are derived from 4 independent experiments. Statistical assessments were performed by applying Ryan’s multiple-comparison test. * < 0.05; ** < 0.001.