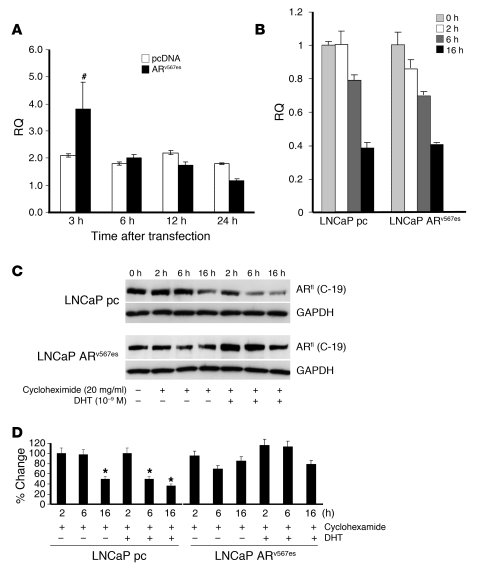 () LNCaP cells were transfected with either the empty vector (pcDNA) or the ARv567es construct. After transfection, RNA was extracted from cells at the times noted, and qt-RT-PCR was performed for ARfl. The relative levels of ARfl at each time point were compared with levels at time 0 hours. Following transfection with the ARv567es construct, there was an increase in mRNA at 3 hours that rapidly returned to control levels by 6 hours after transfection. # < 0.05 ARv567es vs. pcDNA. Values are mean ± SEM. () PCR for ARfl in actinomycin D–treated LNCaP pc and LNCaP ARv567es cells. Note that ARv567es did not significantly affect mRNA stability. () The Western blot of cycloheximide-treated LNCaP pc and LNCaP ARv567es cells demonstrates that ARv567es increases ARfl protein stability in the presence of DHT. () Graph depicting relative protein levels of ARfl following treatment with cycloheximide in LNCaP pc versus LNCaP ARv567es cells. * < 0.01 versus 2 hour time point. Values are mean ± SEM.