CD8+ T cell responses to viral infection are characterized by the emergence of dominant and subdominant CTL populations. The immunodominance hierarchies of these populations are highly reproducible for any given spectrum of virus-induced peptide-MHCI complexes and are likely determined by multiple factors. Recent studies demonstrate a direct correlation between naive epitope-specific CD8+ T cell precursor (CTLp) frequency and the magnitude of the response after antigen challenge. Thus, the number of available precursors in the naive pool has emerged as a key predictor of immunodominance. In contrast to this, we report here no consistent relationship between CTLp frequency and the subsequent magnitude of the immune response for 4 influenza virus–derived epitopes following intranasal infection of mice with influenza A virus. Rather, the characteristic, antigen-driven T cell immunodominance hierarchy was determined by the extent of recruitment from the available pool of epitope-specific precursors and the duration of their continued expansion over the course of the infection. These findings suggest possibilities for enhancing protective immune memory by maximizing both the size and diversity of typically subdominant T cell responses through rational vaccine design. 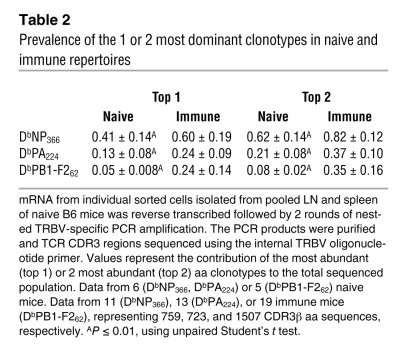