Increased expression and impaired degradation of c-Met in cells. 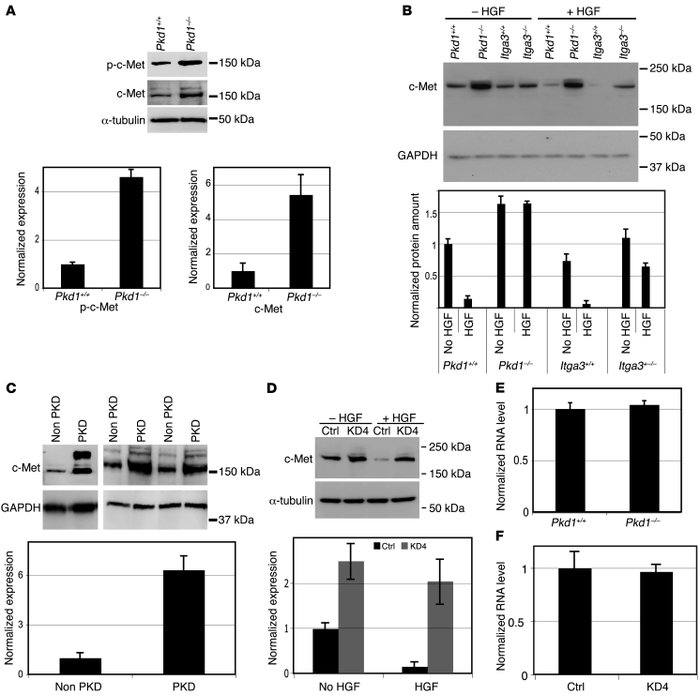 () Western blot for phospho–c-Met (Tyr1234/1235) and c-Met in and E17.5 kidneys. Quantification is shown on the right. () Western blot of c-Met in , , , and cells, with or without HGF stimulation (50 ng/ml HGF for 30 minutes). Densitometric quantification is shown on the right. c-Met was more abundant before stimulation and failed to be degraded in cells. Degradation was also reduced in cells. GAPDH is shown as a loading control. () Western blot of c-Met in extract of human non-cystic and PKD kidneys. Higher levels of c-Met and an additional higher-molecular-weight species are present in the PKD sample. Densitometric quantification is shown on right, each bar represents the average of the 3 samples on left. () Western blot for c-Met after shRNA knockdown of (KD4 cells), also showing increased levels of c-Met in nonstimulated cells and decreased degradation. ( and ) Reverse transcription quantitative PCR (RT-qPCR) for c-Met in and cells (), or cells and KD4 cells (). In and , the level of mRNA in cells is shown relative to the amount in or Ctrl cells. 18S RNA was used as an input control () and for normalization of RT-qPCR ( and ).