Autophagy, a process for catabolizing cytoplasmic components, has been implicated in the modulation of interactions between RNA viruses and their host. However, the mechanism underlying the functional role of autophagy in the viral life cycle still remains unclear. Hepatitis C virus (HCV) is a single-stranded, positive-sense, membrane-enveloped RNA virus that can cause chronic liver disease. Here we report that HCV induces the unfolded protein response (UPR), which in turn activates the autophagic pathway to promote HCV RNA replication in human hepatoma cells. Further analysis revealed that the entire autophagic process through to complete autolysosome maturation was required to promote HCV RNA replication and that it did so by suppressing innate antiviral immunity. Gene silencing or activation of the UPR-autophagy pathway activated or repressed, respectively, IFN-β activation mediated by an HCV-derived pathogen-associated molecular pattern (PAMP). Similar results were achieved with a PAMP derived from Dengue virus (DEV), indicating that HCV and DEV may both exploit the UPR-autophagy pathway to escape the innate immune response. Taken together, these results not only define the physiological significance of HCV-induced autophagy, but also shed light on the knowledge of host cellular responses upon HCV infection as well as on exploration of therapeutic targets for controlling HCV infection.

Induction of UPR and autophagy by HCV infection. 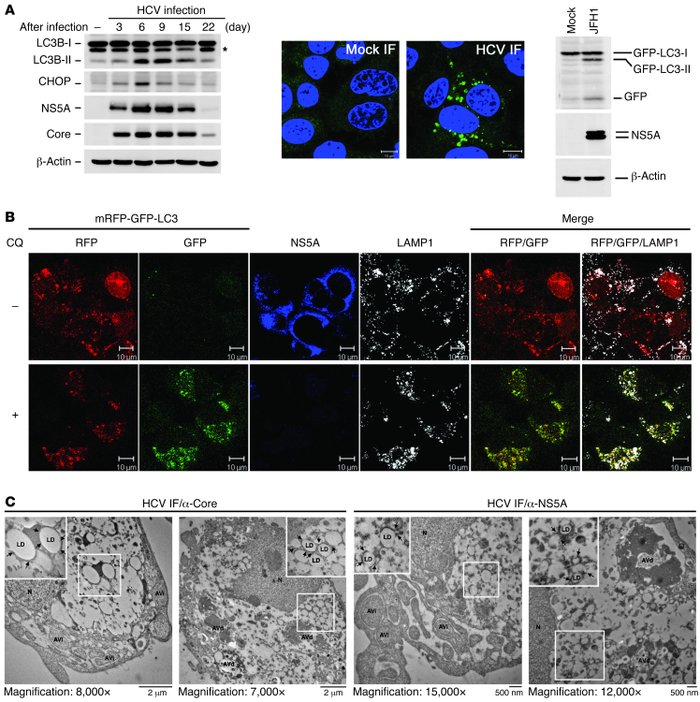 () Huh7 cells were inoculated with HCV at an MOI of 10, and then harvested at different times for Western blot analysis (left panel). The asterisk indicates the nonspecific band. HCV-infected Huh7/GFP-LC3 cells (MOI of 10) were fixed at 6 days after infection and analyzed by confocal microscopy (middle panels) and Western blotting (right panel). Scale bars: 10 μm. () HCV-infected Huh7/mRFP-GFP-LC3 cells (MOI of 10) were maintained for 6 days, treated with (+) or without (–) CQ (50 μM) for 6 hours, and assessed for subcellular localization of the indicated proteins. Scale bars: 10 μm. () HCV-infected cells as described in were processed for immuno-TEM analysis. The larger boxed images represent enlargements of the smaller boxed insets. Another set of enlarged images is shown in Supplemental Figure 2A. The black arrows indicate LD-associated core and NS5A proteins, which were respectively immmunolabeled with 12-nm and 18-nm gold particles. N, nucleus; LD, lipid droplet.