A key adaptation to environmental hypoxia is an increase in erythropoiesis, driven by the hormone erythropoietin (EPO) through what is traditionally thought to be primarily a renal response. However, both neurons and astrocytes (the largest subpopulation of glial cells in the CNS) also express EPO following ischemic injury, and this response is known to ameliorate damage to the brain. To investigate the role of glial cells as a component of the systemic response to hypoxia, we created astrocyte-specific deletions of the murine genes encoding the hypoxia-inducible transcription factors HIF-1α and HIF-2α and their negative regulator von Hippel–Lindau (VHL) as well as astrocyte-specific deletion of the HIF target gene Vegf. We found that loss of the hypoxic response in astrocytes does not cause anemia in mice but is necessary for approximately 50% of the acute erythropoietic response to hypoxic stress. In accord with this, erythroid progenitor cells and reticulocytes were substantially reduced in number in mice lacking HIF function in astrocytes following hypoxic stress. Thus, we have demonstrated that the glial component of the CNS is an essential component of hypoxia-induced erythropoiesis.

Generation of mice deficient for the genes encoding HIF-1α, HIF-2α, and VHL in astrocytes. 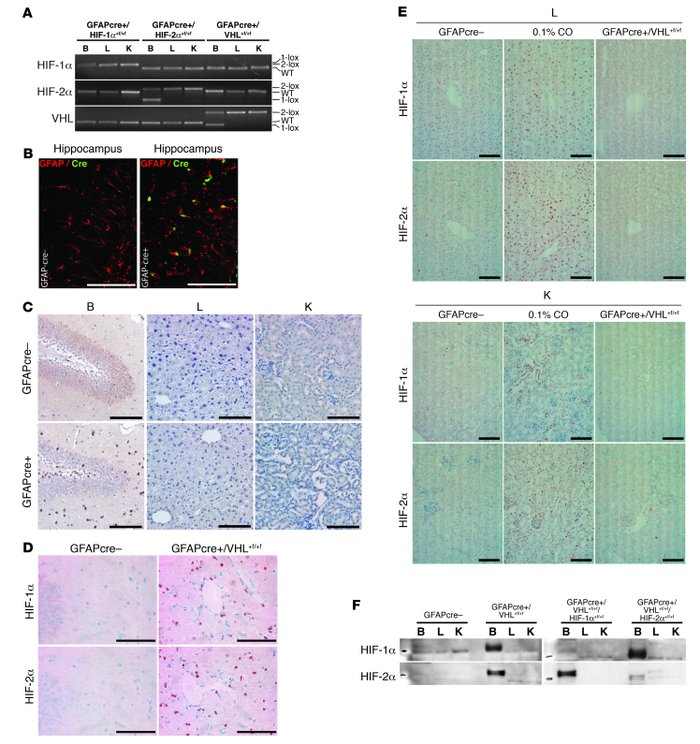