The relative activity of lipoprotein lipase (LPL) in different tissues controls the partitioning of lipoprotein-derived fatty acids between sites of fat storage (adipose tissue) and oxidation (heart and skeletal muscle). Here we used a reverse genetic strategy to test the hypothesis that 4 angiopoietin-like proteins (ANGPTL3, -4, -5, and -6) play key roles in triglyceride (TG) metabolism in humans. We re-sequenced the coding regions of the genes encoding these proteins and identified multiple rare nonsynonymous (NS) sequence variations that were associated with low plasma TG levels but not with other metabolic phenotypes. Functional studies revealed that all mutant alleles of ANGPTL3 and ANGPTL4 that were associated with low plasma TG levels interfered either with the synthesis or secretion of the protein or with the ability of the ANGPTL protein to inhibit LPL. A total of 1% of the Dallas Heart Study population and 4% of those participants with a plasma TG in the lowest quartile had a rare loss-of-function mutation in ANGPTL3, ANGPTL4, or ANGPTL5. Thus, ANGPTL3, ANGPTL4, and ANGPTL5, but not ANGPTL6, play nonredundant roles in TG metabolism, and multiple alleles at these loci cumulatively contribute to variability in plasma TG levels in humans.

Expression of , , , and in human tissues. 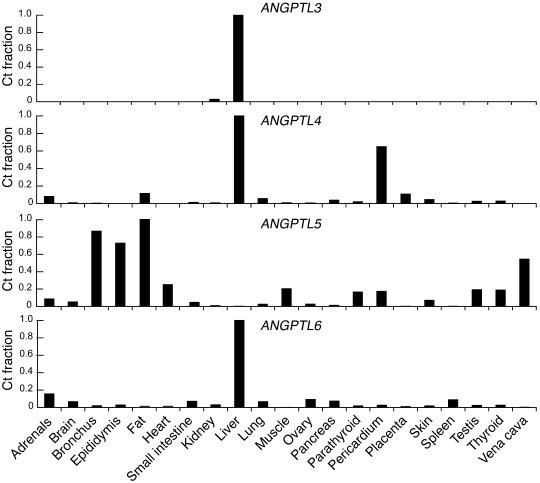 Quantitative real-time PCR was used to determine mRNA levels of the 4 family members in commercial cDNA arrays of 48 tissues prepared from normal humans (Origene). The 21 tissues in which the signal was detected are shown. Each bar represents the average of triplicate measurements expressed as a fraction of the Ct value obtained from the tissue expressing the highest levels of mRNA for that gene.