The clear association of Th17 cells with autoimmune pathogenicity implicates Th17 cytokines as critical mediators of chronic autoimmune diseases such as EAE. To study the impact of IL-17A on CNS inflammation, we generated transgenic mice in which high levels of expression of IL-17A could be initiated after Cre-mediated recombination. Although ubiquitous overexpression of IL-17A led to skin inflammation and granulocytosis, T cell–specific IL-17A overexpression did not have a perceptible impact on the development and health of the mice. In the context of EAE, neither the T cell–driven overexpression of IL-17A nor its complete loss had a major impact on the development of clinical disease. Since IL-17F may be able to compensate for the loss of IL-17A, we also generated IL-17F–deficient mice. This strain was fully susceptible to EAE and displayed unaltered emergence and expansion of autoreactive T cells during disease. To eliminate potential compensatory effects of either cytokine, we treated IL-17F–deficient mice with antagonistic monoclonal antibodies specific for IL-17A and found again only a minimal beneficial impact on disease development. We conclude therefore that both IL-17A and IL-17F, while prominently expressed by an encephalitogenic T cell population, may only marginally contribute to the development of autoimmune CNS disease. 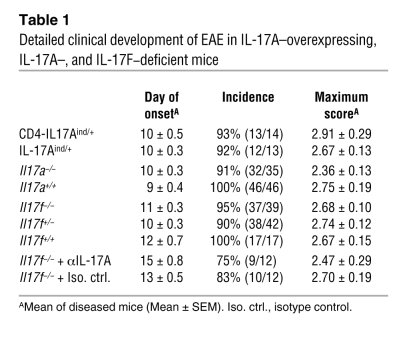