The clear association of Th17 cells with autoimmune pathogenicity implicates Th17 cytokines as critical mediators of chronic autoimmune diseases such as EAE. To study the impact of IL-17A on CNS inflammation, we generated transgenic mice in which high levels of expression of IL-17A could be initiated after Cre-mediated recombination. Although ubiquitous overexpression of IL-17A led to skin inflammation and granulocytosis, T cell–specific IL-17A overexpression did not have a perceptible impact on the development and health of the mice. In the context of EAE, neither the T cell–driven overexpression of IL-17A nor its complete loss had a major impact on the development of clinical disease. Since IL-17F may be able to compensate for the loss of IL-17A, we also generated IL-17F–deficient mice. This strain was fully susceptible to EAE and displayed unaltered emergence and expansion of autoreactive T cells during disease. To eliminate potential compensatory effects of either cytokine, we treated IL-17F–deficient mice with antagonistic monoclonal antibodies specific for IL-17A and found again only a minimal beneficial impact on disease development. We conclude therefore that both IL-17A and IL-17F, while prominently expressed by an encephalitogenic T cell population, may only marginally contribute to the development of autoimmune CNS disease.

IL-17A overexpression does not exacerbate EAE. 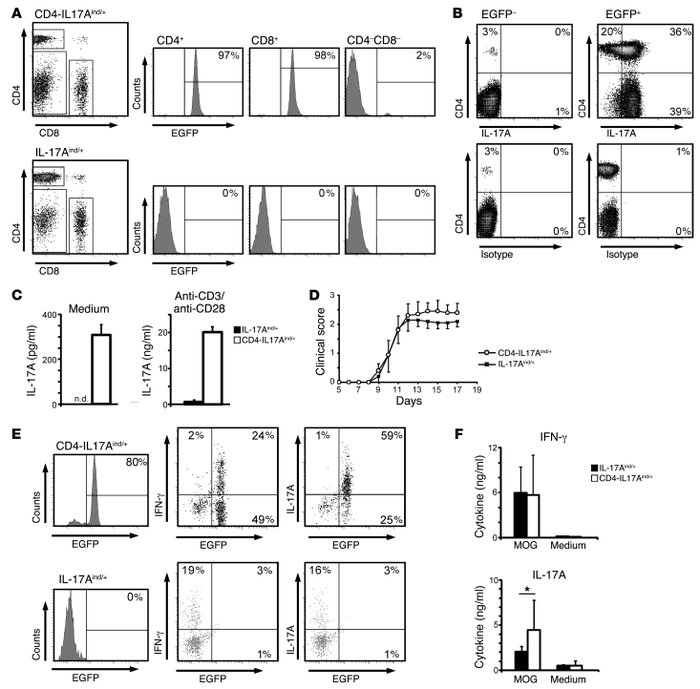 () LNs from CD4-IL17Aind/+ and IL-17Aind/+ littermates were isolated and stained for CD4 and CD8 coreceptors. EGFP expression is depicted in the histograms after indicated gating. Percentages of gated cells are shown. () Splenocytes from naive CD4-IL17Aind/+ mice were restimulated in the presence of Brefeldin A and subsequently stained for CD4 and IL-17A. Percentages of cells in the quadrants are indicated in the corners after gating was performed on all EGFP– (plots on the left) or all EGFP+ (plots on the right) cells. Data shown are representative of 3 independent experiments. () FACS-sorted CD4+ T cells (2 × 105) were cultured for 24 hours in the presence or absence of anti-CD3 and anti-CD28, after which IL-17A secretion was measured by flow cytomix assay. Error bars represent mean ± SD. n.d., not detectable. () Clinical scores after MOG35–55-induced EAE are not significantly altered by increased IL-17A expression in CD4-IL17Aind/+ and IL-17Aind/+ littermates. Error bars represent mean ± SEM. Data shown represent 1 out of 3 independent experiments. () Lymphocytes isolated from the diseased EAE brain and spinal cord at day 14 from CD4-IL17Aind/+ and IL-17Aind/+ littermates were restimulated and surface stained for CD4 and examined for EGFP expression. Further staining for IL-17A and IFN-γ was performed. Percentages of EGFP+IL-17A+ or EGFP+IFN-γ+ are given in the quadrant corners. Plots shown are gated on CD4+ CNS-derived T cells. () At peak disease, mononuclear infiltrates were isolated from inflamed CNS extracts from either CD4-IL17Aind/+ or IL-17Aind/+ mice. Cellular extracts were cultured for 2 days in the presence of 20 μg/ml MOG peptide, after which cytokine secretions were measured by flow cytomix. Error bars represent mean ± SD and significance is shown where relevant. * = 0.039, Student’s test.