Oligodendrocyte precursor cells (OPCs) persist near the demyelinated axons arising in MS but inefficiently differentiate into oligodendrocytes and remyelinate these axons. The pathogenesis of differentiation failure remains elusive. We initially hypothesized that injured axons fail to present Contactin, a positive ligand for the oligodendroglial Notch1 receptor to induce myelination, and thus tracked axoglial Contactin/Notch1 signaling in situ, using immunohistochemistry in brain tissue from MS patients containing chronic demyelinated lesions. Instead, we found that Contactin was saturated on demyelinated axons, Notch1-positive OPCs accumulated in Contactin-positive lesions, and the receptor was engaged, as demonstrated by cleavage to Notch1-intracellular domain (NICD). However, nuclear translocalization of NICD, required for myelinogenesis, was virtually absent in these cells. NICD and related proteins carrying nuclear localization signals were associated with the nuclear transporter Importin but were trapped in the cytoplasm. Abnormal expression of TIP30, a direct inhibitor of Importin, was observed in these OPCs. Overexpression of TIP30 in a rat OPC cell line resulted in cytoplasmic entrapment of NICD and arrest of differentiation upon stimulation with Contactin-Fc. Our results suggest that extracellular inhibitory factors as well as an intrinsic nucleocytoplasmic transport blockade within OPCs may be involved in the pathogenesis of remyelination failure in MS.

Remyelination failure in MS may not be due to loss of axonal Contactin stimuli or induction of nuclear Hes5 by astrocytes. 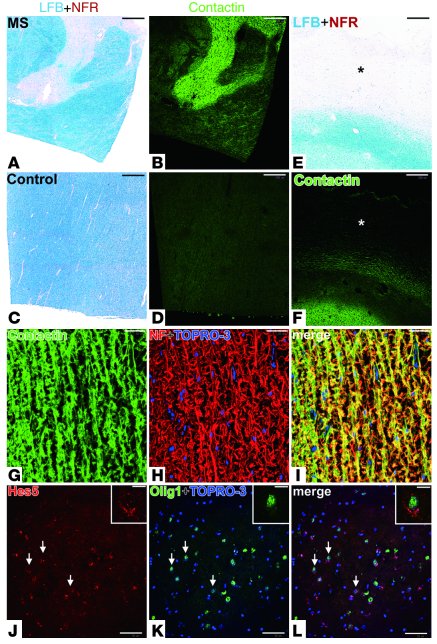 () LFB staining showing normal-appearing white matter (blue) and a demyelinated lesion (white) in an MS brain (frontal lobe cerebral lesion from 47-year-old female with secondary progressive MS; disease duration: 20 years). Cntn, Contactin. () Section consecutive to , showing that the expression of Contactin is upregulated in the demyelinated lesion. () Demyelination is not apparent in a control subject (parietal lobe cerebral specimen from 81-year-old female without brain disease). () Section consecutive to showing that Contactin is expressed at a low degree; thus, the expression is unremarkable in photograph at lower magnification. Overexpression of Contactin in MS demyelinated lesions are observed in all 10 MS specimens included in this study (the other 9 MS samples are shown in Supplemental Figure 1). ( and ) Contactin immunoreactivity was lost in demyelinated areas where severe tissue damage was evident (asterisks; frontal lobe cerebral lesion from 59-year-old male with primary progressive MS. Isotype controls are shown in Supplemental Figure 2. (–) Overexpression of Contactin in MS demyelinated lesions occurs on the surfaces of axons positive for neurofilament (NF). Photographs at lower magnification are shown in Supplemental Figure 3. (–) Preserved OPCs in MS lesions are positive for nuclear Olig1 () and express Hes-5 in the cytoplasm but not in the nucleus (arrows and insets). Scale bars: 500 μm (–); 50 μm (–); 10 μm (insets in –).