Treatments for primary and metastatic melanomas are rarely effective. Even therapeutics such as retinoic acid (RA) that are successfully used to treat several other forms of cancer are ineffective. Recent evidence indicates that the antiproliferative effects of RA are mediated by the transcription factor SOX9 in human cancer cell lines. As we have previously shown that SOX9 is expressed in normal melanocytes, here we investigated SOX9 expression and function in human melanomas. Although SOX9 was expressed in normal human skin, it was increasingly downregulated as melanocytes progressed to the premalignant and then the malignant and metastatic states. Overexpression of SOX9 in both human and mouse melanoma cell lines induced cell cycle arrest by increasing p21 transcription and restored sensitivity to RA by downregulating expression of PRAME, a melanoma antigen. Furthermore, SOX9 overexpression in melanoma cell lines inhibited tumorigenicity both in mice and in a human ex vivo model of melanoma. Treatment of melanoma cell lines with PGD2 increased SOX9 expression and restored sensitivity to RA. Thus, combined treatment with PGD2 and RA substantially decreased tumor growth in human ex vivo and mouse in vivo models of melanoma. The results of our experiments targeting SOX9 provide insight into the pathophysiology of melanoma. Further, the effects of SOX9 on melanoma cell proliferation and RA sensitivity suggest the encouraging possibility of a noncytotoxic approach to the treatment of melanoma.

SOX9 acts on MITF and p21 to inhibit proliferation. 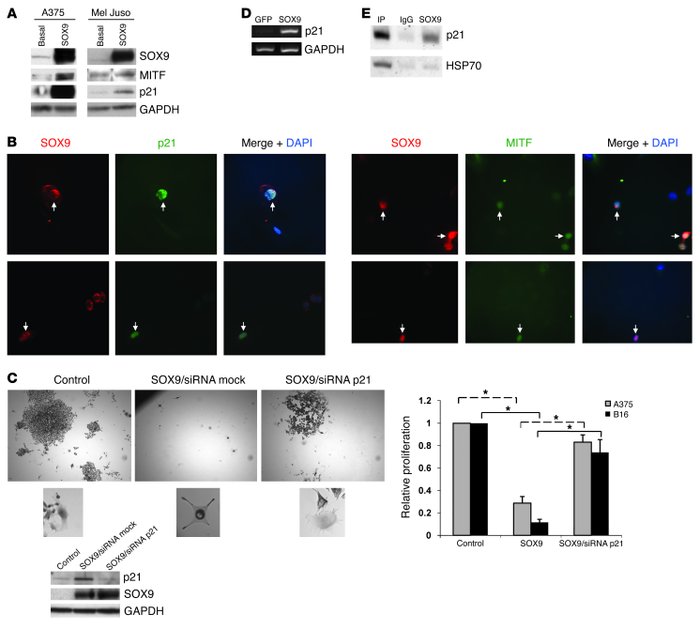 () A375 and Mel Juso melanoma cells were transduced with SOX9 lentivirus or with GFP lentivirus as a control. One week after selection with blasticidin, proteins were extracted and analyzed using immunoblotting with SOX9, p21, MITF, and GAPDH antibodies. () A375 melanoma cells were transfected with SOX9 cDNA and were fixed 48 hours after transfection and stained for SOX9 (red), DAPI (blue), and either p21 (left panels) or MITF (right panels) antibodies (green). Transfected cells are identified with arrows. Original magnification, ×20. () Proliferation assay of B16/F10 murine melanoma cells comparing empty vector (Control); SOX9 cDNA combined with siRNA mock (SOX9/siRNA mock); and SOX9 cDNA combined with siRNA of p21 (SOX9/siRNA p21). Assays were stopped after 10 days, and images are shown at a magnification of ×10 (upper panels). The lower panels show higher-magnification (×40) images of individual cells. Note the clear differentiation observed in SOX9-transfected cells with melanosomes accumulating at the peripheries of the dendrites. The graph shows the relative proliferation of SOX9-transfected B16 or A375 cells with or without silencing of p21 compared with the controls (* < 0.001). The immunoblot below shows proteins extracted from B16/F10 cells in the same conditions using antibodies against SOX9, p21, and GAPDH. () Expression levels of the p21 using RT-PCR in A375 cells transfected for 48 hours with GFP or cDNA SOX9 cDNA. GAPDH expression served as the control. () ChIP assays performed on A375 melanoma cells using IgG or SOX9 antibodies. Immunoprecipitated DNAs were analyzed using PCR with p21 and HSP70 primers.