Estrogen plays a fundamental role in skeletal growth and bone homeostasis in both men and women. Although remarkable progress has been made in our understanding of how estrogen deficiency causes bone loss, the mechanisms involved have proven to be complex and multifaceted. Although estrogen is established to have direct effects on bone cells, recent animal studies have identified additional unexpected regulatory effects of estrogen centered at the level of the adaptive immune response. Furthermore, a potential role for reactive oxygen species has now been identified in both humans and animals. One major challenge is the integration of a multitude of redundant pathways and cytokines, each apparently capable of playing a relevant role, into a comprehensive model of postmenopausal osteoporosis. This Review presents our current understanding of the process of estrogen deficiency–mediated bone destruction and explores some recent findings and hypotheses to explain estrogen action in bone. Due to the inherent difficulties associated with human investigation, many of the lessons learned have been in animal models. Consequently, many of these principles await further validation in humans. 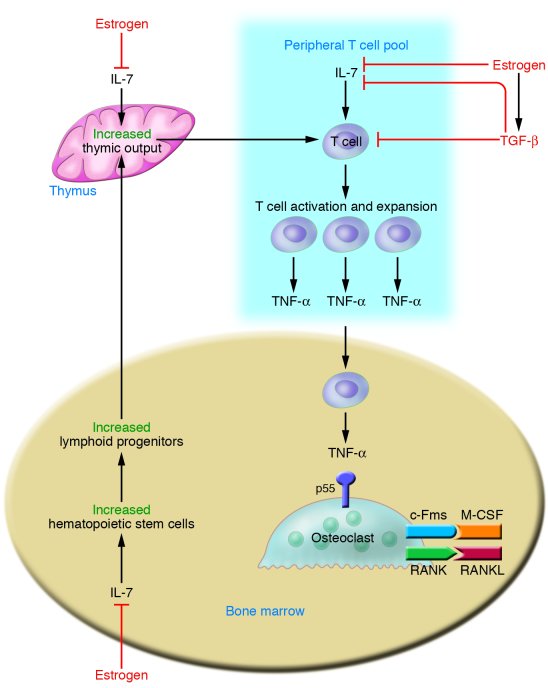 In the bone marrow, estrogen downregulates the proliferation of hematopoietic stem cells through an IL-7–dependent mechanism, resulting in a smaller pool of lymphoid progenitors. T cell precursors leave the bone marrow and migrate to the thymus, where T cell differentiation, selection, and expansion take place, in large measure under control of IL-7. Following release from the thymus (thymic output), these new T cells home to peripheral lymphoid organs, including the bone marrow itself. Estrogen prevents T cell activation in part by directly blunting antigen presentation and in part via repression of IL-7 and IFN-γ production. This effect is amplified by the upregulation of the IL-7 suppressor TGF-β. The net result of these actions is a decrease in the number of TNF-producing T cells. The blunted levels of TNF diminish RANKL-induced OC formation, ultimately preventing bone loss.