In humans, inactivating mutations in the gene of the thyroid hormone transporter monocarboxylate transporter 8 (MCT8; SLC16A2) lead to severe forms of psychomotor retardation combined with imbalanced thyroid hormone serum levels. The MCT8-null mice described here, however, developed without overt deficits but also exhibited distorted 3,5,3′-triiodothyronine (T3) and thyroxine (T4) serum levels, resulting in increased hepatic activity of type 1 deiodinase (D1). In the mutants’ brains, entry of T4 was not affected, but uptake of T3 was diminished. Moreover, the T4 and T3 content in the brain of MCT8-null mice was decreased, the activity of D2 was increased, and D3 activity was decreased, indicating the hypothyroid state of this tissue. In the CNS, analysis of T3 target genes revealed that in the mutants, the neuronal T3 uptake was impaired in an area-specific manner, with strongly elevated thyrotropin-releasing hormone transcript levels in the hypothalamic paraventricular nucleus and slightly decreased RC3 mRNA expression in striatal neurons; however, cerebellar Purkinje cells appeared unaffected, since they did not exhibit dendritic outgrowth defects and responded normally to T3 treatment in vitro. In conclusion, the circulating thyroid hormone levels of MCT8-null mice closely resemble those of humans with MCT8 mutations, yet in the mice, CNS development is only partially affected.

Generation and analysis of MCT8-null mice. 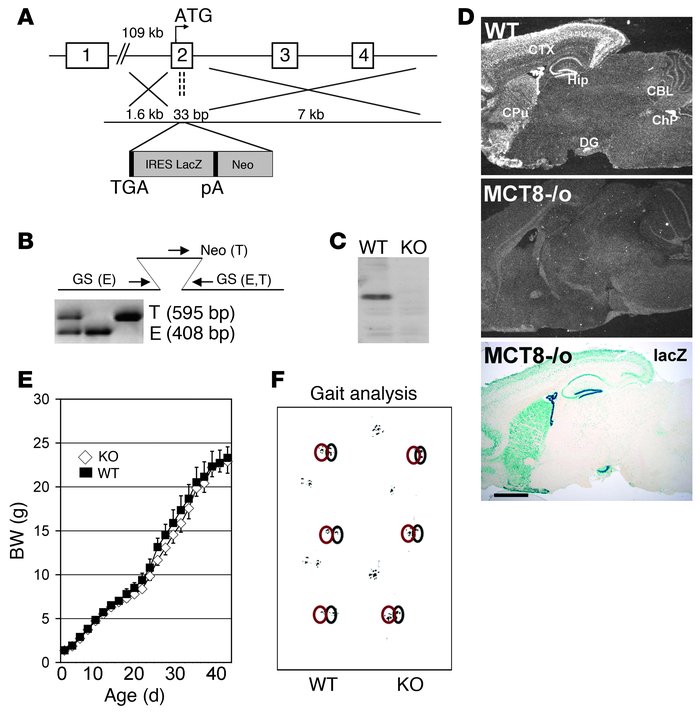