Mice lacking macrophage elastase (matrix metalloproteinase-12, or MMP-12) were previously shown to be protected from the development of cigarette smoke–induced emphysema and from the accumulation of lung macrophages normally induced by chronic exposure to cigarette smoke. To determine the basis for macrophage accumulation in experimental emphysema, we now show that bronchoalveolar lavage fluid from WT smoke-exposed animals contained chemotactic activity for monocytes in vitro that was absent in lavage fluid from macrophage elastase–deficient mice. Fractionation of the bronchoalveolar lavage fluid demonstrated the presence of elastin fragments only in the fractions containing chemotactic activity. An mAb against elastin fragments eliminated both the in vitro chemotactic activity and cigarette smoke–induced monocyte recruitment to the lung in vivo. Porcine pancreatic elastase was used to recruit monocytes to the lung and to generate emphysema. Elastin fragment antagonism in this model abrogated both macrophage accumulation and airspace enlargement.

Effects of PPE and EF antagonism on lung macrophage content in vivo. 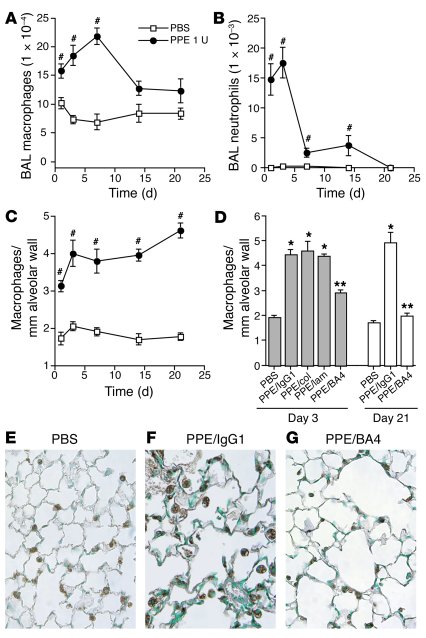