The vascular endothelium controls vasomotor tone and microvascular flow and regulates trafficking of nutrients and biologically active molecules. When endothelial activation is excessive, compromised microcirculation and subsequent cellular hypoxia contribute to the risk of organ failure. We hypothesized that strict blood glucose control with insulin during critical illness protects the endothelium, mediating prevention of organ failure and death. In this preplanned subanalysis of a large, randomized controlled study, intensive insulin therapy lowered circulating levels of ICAM-1 and tended to reduce E-selectin levels in patients with prolonged critical illness, which reflects reduced endothelial activation. This effect was not brought about by altered levels of endothelial stimuli, such as cytokines or VEGF, or by upregulation of eNOS. In contrast, prevention of hyperglycemia by intensive insulin therapy suppressed iNOS gene expression in postmortem liver and skeletal muscle, possibly in part via reduced NF-κB activation, and lowered the elevated circulating NO levels in both survivors and nonsurvivors. These effects on the endothelium statistically explained a significant part of the improved patient outcome with intensive insulin therapy. In conclusion, maintaining normoglycemia with intensive insulin therapy during critical illness protects the endothelium, likely in part via inhibition of excessive iNOS-induced NO release, and thereby contributes to prevention of organ failure and death. 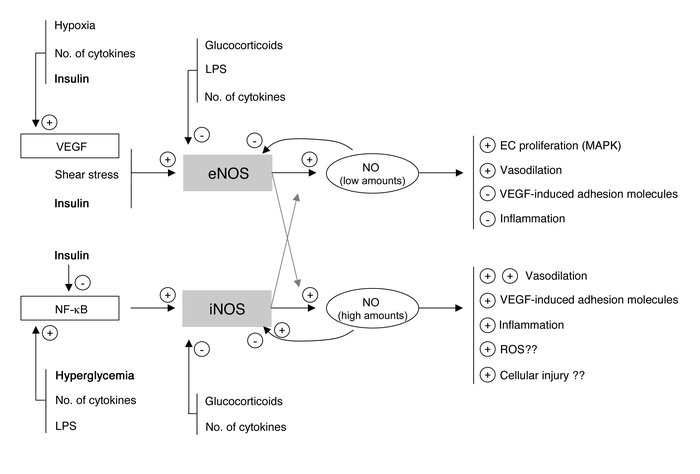 Simplified concept and rationale of the study. Low concentrations of NO, normally generated by eNOS, are likely to be beneficial for the endothelium and organ function, whereas high concentrations of NO, generated via iNOS induction, may contribute to endothelium dysfunction, excessive vasodilation, extravasation, and tissue injury. Insulin-titrated prevention of hyperglycemia during critical illness may theoretically protect the endothelium via its effects on eNOS and iNOS expression and activity.