Synergy between a plasminogen cascade and MMP-9 in autoimmune disease

Synergy between a plasminogen cascade and MMP-9 in autoimmune disease

Extracellular proteolysis by the plasminogen/plasmin (Plg/plasmin) system and MMPs is required for tissue injury in autoimmune and inflammatory diseases. We demonstrate that a Plg cascade synergizes with MMP-9/gelatinase B in vivo during dermal-epidermal separation in an experimental model of bullous pemphigoid (BP), an autoimmune disease. BP was induced in mice by antibodies to the hemidesmosomal antigen BP180. Mice deficient in MMP-9 were resistant to experimental BP, while mice deficient in Plg and both tissue Plg activator (tPA) and urokinase Plg activator (uPA) showed delayed and less intense blister formation induced by antibodies to BP180. Plg-deficient mice reconstituted locally with Plg or the active form of MMP-9 (actMMP-9), but not the proenzyme form of MMP-9 (proMMP-9), developed BP. In contrast, proMMP-9 or actMMP-9, but not Plg, reconstituted susceptibility of MMP-9–deficient mice to the skin disease. In addition, MMP-3–deficient mice injected with pathogenic IgG developed the same degree of BP and expressed levels of actMMP-9 in the skin similar to those of WT controls. Thus, the Plg/plasmin system is epistatic to MMP-9 activation and subsequent dermal-epidermal separation in BP. 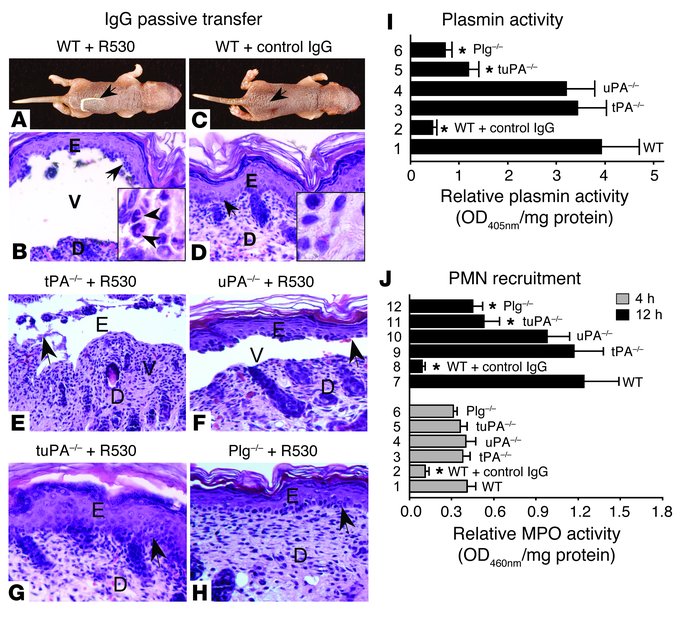