Elevated FFA concentrations have been shown to reproduce some of the metabolic abnormalities of obesity. It has been hypothesized that visceral adipose tissue lipolysis releases excess FFAs into the portal vein, exposing the liver to higher FFA concentrations. We used isotope dilution/hepatic vein catheterization techniques to examine whether intra-abdominal fat contributes a greater portion of hepatic FFA delivery in visceral obesity. Obese women (n = 24) and men (n = 20) with a range of obesity phenotypes, taken together with healthy, lean women (n = 12) and men (n = 12), were studied. Systemic, splanchnic, and leg FFA kinetics were measured. The results showed that plasma FFA concentrations were approximately 20% greater in obese men and obese women. The contribution of splanchnic lipolysis to hepatic FFA delivery ranged from less than 10% to almost 50% and increased as a function of visceral fat in women (r = 0.49, P = 0.002) and in men (r = 0.52, P = 0.002); the slope of the relationship was greater in women than in men (P < 0.05). Leg and splanchnic tissues contributed a greater portion of systemic FFA release in obese men and women than in lean men and women. We conclude that the contribution of visceral adipose tissue lipolysis to hepatic FFA delivery increases with increasing visceral fat in humans and that this effect is greater in women than in men. 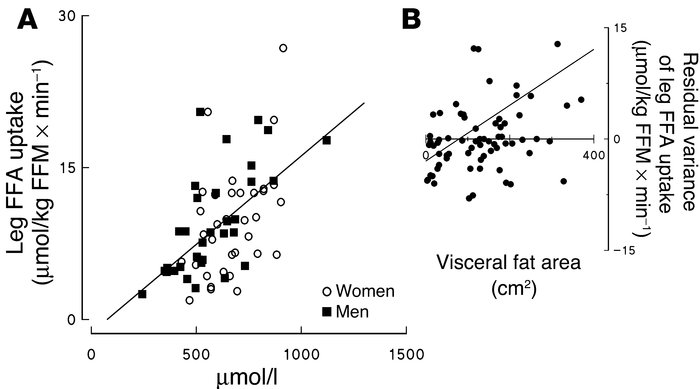