Psoriasis is a chronic inflammatory disease of the skin characterized by epidermal hyperplasia, dermal angiogenesis, infiltration of activated T cells, and increased cytokine levels. One of these cytokines, IL-15, triggers inflammatory cell recruitment, angiogenesis, and production of other inflammatory cytokines, including IFN-γ, TNF-α, and IL-17, which are all upregulated in psoriatic lesions. To investigate the role of IL-15 in psoriasis, we generated mAb’s using human immunoglobulin-transgenic mice. One of the IL-15–specific antibodies we generated, 146B7, did not compete with IL-15 for binding to its receptor but potently interfered with the assembly of the IL-15 receptor α, β, γ complex. This antibody effectively blocked IL-15–induced T cell proliferation and monocyte TNF-α release in vitro. In a human psoriasis xenograft model, antibody 146B7 reduced the severity of psoriasis, as measured by epidermal thickness, grade of parakeratosis, and numbers of inflammatory cells and cycling keratinocytes. These results obtained with this IL-15–specific mAb support an important role for IL-15 in the pathogenesis of psoriasis. 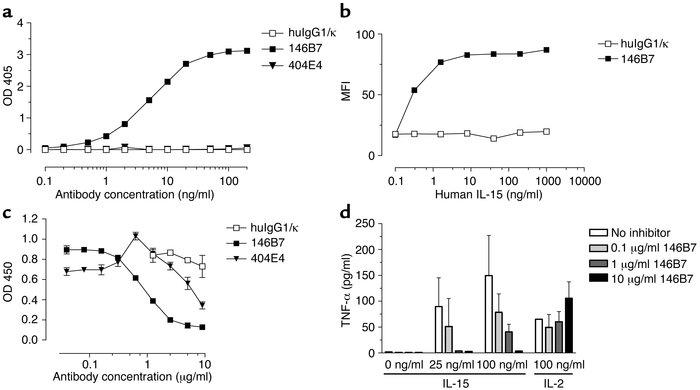