Once human photoreceptors die, they do not regenerate, thus, photoreceptor transplantation has emerged as a potential treatment approach for blinding diseases. Improvements in transplant organization, donor cell maturation, and synaptic connectivity to the host will be critical in advancing this technology for use in clinical practice. Unlike the unstructured grafts of prior cell-suspension transplantations into end-stage degeneration models, we describe the extensive incorporation of induced pluripotent stem cell (iPSC) retinal organoid–derived human photoreceptors into mice with cone dysfunction. This incorporative phenotype was validated in both cone-only as well as pan-photoreceptor transplantations. Rather than forming a glial barrier, Müller cells extended throughout the graft, even forming a series of adherens junctions between mouse and human cells, reminiscent of an outer limiting membrane. Donor-host interaction appeared to promote polarization as well as the development of morphological features critical for light detection, namely the formation of inner and well-stacked outer segments oriented toward the retinal pigment epithelium. Putative synapse formation and graft function were evident at both structural and electrophysiological levels. Overall, these results show that human photoreceptors interacted readily with a partially degenerated retina. Moreover, incorporation into the host retina appeared to be beneficial to graft maturation, polarization, and function. 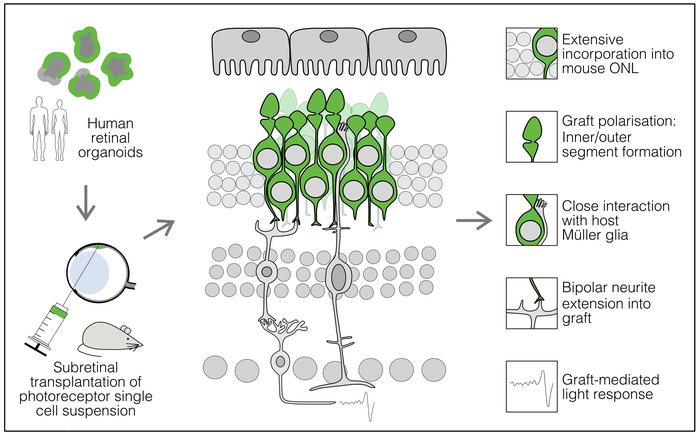