Astrocytes are highly heterogeneous in their phenotype and function, which contributes to CNS disease, repair, and aging; however, the molecular mechanism of their functional states remains largely unknown. Here, we show that activation of sirtuin 1 (SIRT1), a protein deacetylase, played an important role in the detrimental actions of reactive astrocytes, whereas its inactivation conferred these cells with antiinflammatory functions that inhibited the production of proinflammatory mediators by myeloid cells and microglia and promoted the differentiation of oligodendrocyte progenitor cells. Mice with astrocyte-specific Sirt1 knockout (Sirt1–/–) had suppressed progression of experimental autoimmune encephalomyelitis (EAE), an animal model of CNS inflammatory demyelinating disease. Ongoing EAE was also suppressed when Sirt1 expression in astrocytes was diminished by a CRISPR/Cas vector, resulting in reduced demyelination, decreased numbers of T cells, and an increased rate of IL-10–producing macrophages and microglia in the CNS, whereas the peripheral immune response remained unaffected. Mechanistically, Sirt1–/– astrocytes expressed a range of nuclear factor erythroid–derived 2–like 2 (Nfe2l2) target genes, and Nfe2l2 deficiency shifted the beneficial action of Sirt1–/– astrocytes to a detrimental one. These findings identify an approach for switching the functional state of reactive astrocytes that will facilitate the development of astrocyte-targeting therapies for inflammatory neurodegenerative diseases such as multiple sclerosis. 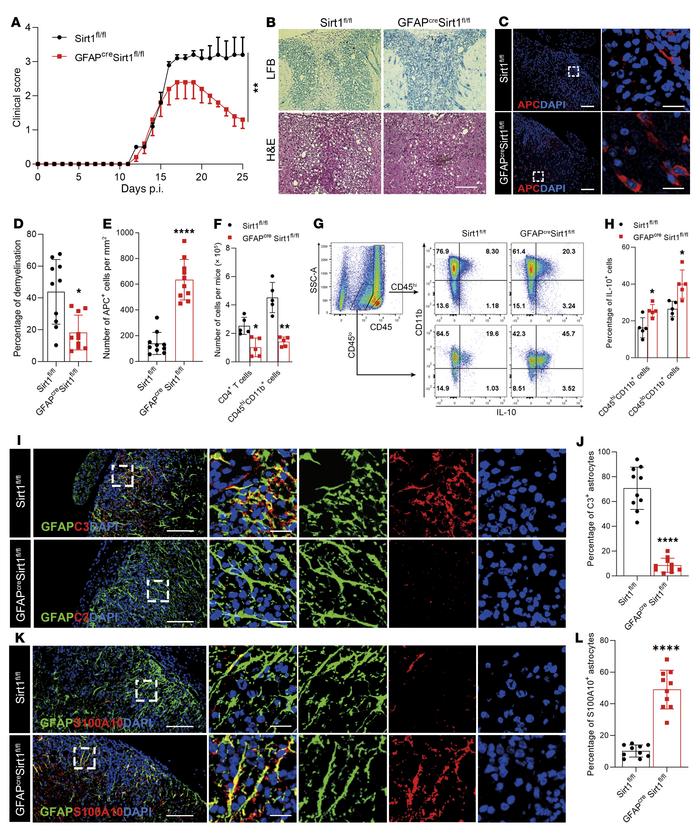 EAE was induced in GFAPCre mice and control mice by MOG35–55 peptide in CFA and pertussis toxin. () Clinical signs were scored in a blinded manner by 2 researchers following a 0–5 scale. Mice were sacrificed on day 25 p.i. = 5 mice per group. Results are expressed as the mean ± SEM. () Representative LFB- and H&E-stained images of spinal cord from EAE mice. Scale bar: 50 μm. () Immunofluorescence staining of spinal cord from EAE mice with anti-APC antibody (CC1), a marker of newly formed oligodendrocytes. Scale bars: 100 μm (left panel) and 20 μm (enlarged insets, right panel). ( and ) Statistical analysis of LFB () and APC () staining results. = 5 mice per group. () Total number of CD4+ T cells and myeloid cells (CD45hiCD11b+) from the CNS of GFAPCre and mice were analyzed by flow cytometry. () Expression of IL-10 in CD45hi (myeloid) and CD45lo (microglia) cells from GFAPCre or EAE mice was analyzed by flow cytometry. () Statistical analysis of the data in . = 5 mice per group. (–) Spinal cords were stained for GFAP and C3, a representative marker of neurotoxic astrocytes (), as well as GFAP and S100A10, a representative marker of antiinflammatory astrocytes (). Scale bars: 100 μm (left panels in and ) and 20 μm (enlarged insets in the right panels in and ). The percentages of C3+ () and S100A10+ () astrocytes were quantified. = 5 mice per group. Data in –, , , and are expressed as the mean ± SD. * < 0.05, ** < 0.01, and **** < 0.0001, by 2-way, repeated-measures ANOVA () and unpaired, 2-tailed test (–, , , and ). Data from 1 representative experiment of 3 are shown.