Early initiation of antiretroviral therapy (ART) in acute HIV infection (AHI) is effective at limiting seeding of the HIV viral reservoir, but little is known about how the resultant decreased antigen load affects long-term Ab development after ART. We report here that Env-specific plasma antibody (Ab) levels and Ab-dependent cellular cytotoxicity (ADCC) increased during the first 24 weeks of ART and correlated with Ab levels persisting after 48 weeks of ART. Participants treated in AHI stage 1 had lower Env-specific Ab levels and ADCC activity on ART than did those treated later. Importantly, participants who initiated ART after peak viremia in AHI developed elevated cross-clade ADCC responses that were detectable 1 year after ART initiation, even though clinically undetectable viremia was reached by 24 weeks. These data suggest that there is more germinal center (GC) activity in the later stages of AHI and that Ab development continues in the absence of detectable viremia during the first year of suppressive ART. The development of therapeutic interventions that can enhance earlier development of GCs in AHI and Abs after ART initiation could provide important protection against the viral reservoir that is seeded in individuals treated early in the disease.

HIV-specific antibodies with ADCC function do not develop until S4/5 of AHI. 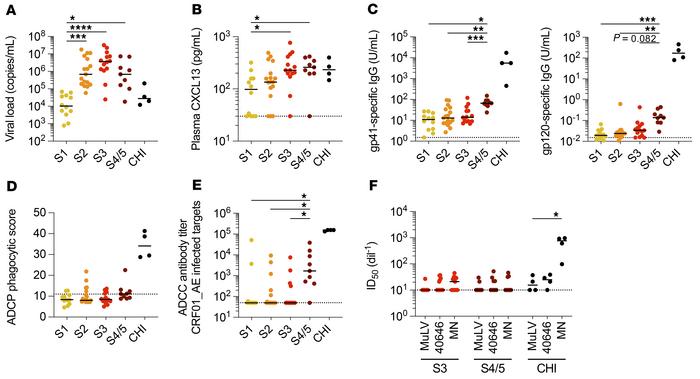